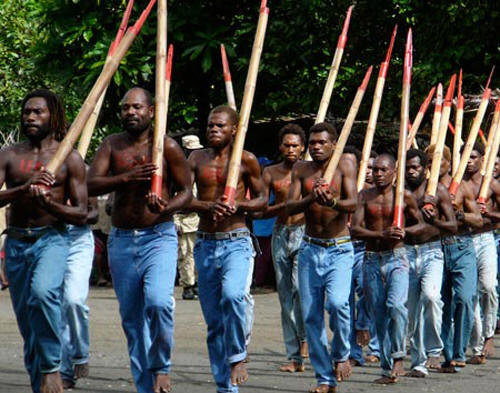 In total, there are more than 400 religions, cults and teachings in the world. Some have millions of followers, some have just several dozen adherents. The most amazing is the cult cargo that arose on the islands of the Pacific Ocean in the middle of the 20th century. IN the years of World War II on the islands of Melanesia, Americans became in massively organize military points. These were meteorological and observation posts, intermediate aerodromes, weapons depots and fuel and lubricants. The personnel of each such mini-base totaled from 50 to 100 people: attendants and sea foot soldiers for protection. After the defeat of Japan, the bases were closed, staff evacuated. But soldiers stay on every island in a very strong influence on the mentality of the locals, changed their way of thinking, vision of the world. Most aborigines on the islands lived in the Stone Age, this was their first contact with civilization. How did they perceive it? Magical birds arrived brought white people. In the eyes of the Melanesians, these were celestials. At White people had a lot of interesting and useful things: tents, shoes, flashlights, cans with stew and jam, lighters, steel knives, fiery water and much more. White people were rich and generous. They honestly exchanged their treasures for fish, fruit, fresh meat, and young beauties-natives generally could receive a gift “for just so. “Moreover, all these objects were not produced by white people, but they got them from the womb of iron birds, which regularly flew to Isle. And sometimes birds generally just dropped gifts from the sky. Lighters, knives, wire, nails, and other useful items very soon entered the life of the natives. White people gained status intermediaries between islanders and gods.

But once magical birds flew in and carried away white people. Era magical things are over. Prevailing was the world order violated. The natives were very upset. Frustrated, they turned to a sorcerer with a question, is it possible to return magic birds and white people back? The sorcerer thought and advised turning to the gods. Natives knocked on drums in good faith, but the birds didn’t arrive. Let’s go back to the sorcerer: “What’s wrong?” And then the sorcerer reminded them that ritual actions of white people to call magic birds were completely different, so you can’t do with the drums alone. When a few years later anthropologists arrived on the island, they found amazing picture. Remaining runways from the war kept in perfect order. At the beginning of each strip stood aircraft ready to take off from straw. Along the edges of the airfield wicker towers decorated with knots-antennas. In the “Dispatch” sat “operators” with headphones made from halves of coconuts and screamed teams in bamboo microphones. “Servants” walked along the airfield and waved homemade flags. Every morning on the mast rose already worn US flag, a garrison marched along the airfield, carrying on the shoulders are wooden sticks instead of rifles. The shoulders of many walking decorated with epaulettes, and chest – orders and medals. On the back of each one was marked with the magic signs “USA”. Adherents Worshiped new religion to Uncle Sam and Santa Claus. Praying every day the islanders had no time at all to engage in hunting, fishing, and agriculture. It did not die out only because part the tribe continued to hold conservative views on world order: in order not to starve to death, one must not pray, but work. In order to save the tribe, a humanitarian aid was urgently brought help. When a few months later, scientists again visited the island, they grabbed their heads: on the island by hunting, fishing is no longer nobody was engaged. But another airdrome was being built at an accelerated pace, and the sorcerer was in an unattainable authority: still, his prediction came true, magic birds flew in and brought in plenty. This the new religion is called the “cult of cargo” (worship of cargo – English.) At present, thanks to enlightenment, the number of “aircraft fans” is gradually decreasing. However still 5% Melanesians believe that “everything will fall from heaven itself, it is only necessary persistently pray “and pray … Santa Claus.

World religions 0
People, throughout a long history, always believed in signs, signs, miracles. And so were

World religions 0
In the Muslim and Christian traditions, the promised second the coming of Isa bin

World religions 0
Over the Sistine Chapel in the Vatican is white smoke. it means a new

World religions 0
A little girl who could literally live minutes began to come back to life
Leave a Reply Cancel reply
Recent Posts
Categories
Recent Comments
Archives
This site uses cookies to store data. By continuing to use the site, you consent to work with these files.