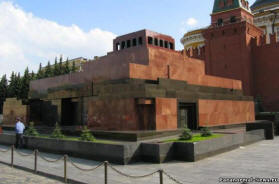 “In the morning, at eleven o’clock, on January 23, 1924 I gathered first meeting of experts on the construction of the grave for Vladimir Ilyich, whom it was decided to bury on Red Square near the Kremlin wall, and over the grave to build a Mausoleum. “V. D. Bonch-Bruevich.

January 27, during the official funeral procedure at exactly 4 p.m. telegraph agencies of the Soviet Union reported: “Stand up comrades, Ilyich is lowered into the grave! ”

Ziggurat (ziggurat, ziggurat): in ancient architecture Mesopotamia is a cult tier tower. Ziggurats had 3-7 tiers in the shape of truncated pyramids or parallelepipeds of raw brick, connected by stairs and gentle slopes – ramps (Dictionary of architectural terms). 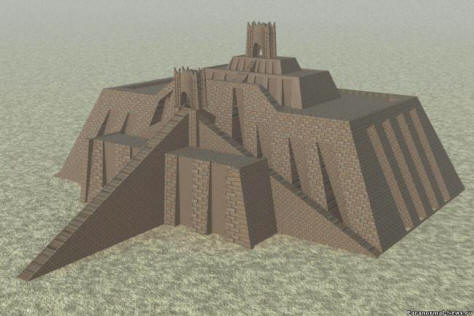 A.I.Abrikosov – unquestioned authority in the field of anatomy – considered the struggle to preserve the body meaningless, because on it pigmentation appeared and the process of drying the tissues began. is he stated then that modern science does not have methods preserving the human body for long periods.

March 21, 1924 after negotiations of a certain V. Zbarsky with the creator and leader of the Cheka-OGPU F. Dzerzhinsky was adopted the decision to proceed with embalming. Why did you decide embalm the body of “Lenin”? Official version: message flows, telegrams perpetuating the memory of the leader, requests to leave the body Lenin imperishable, keeping it for centuries. (However, such letters in no archives found. The letters proposed only to perpetuate memory of Lenin in grandiose structures, monuments.) 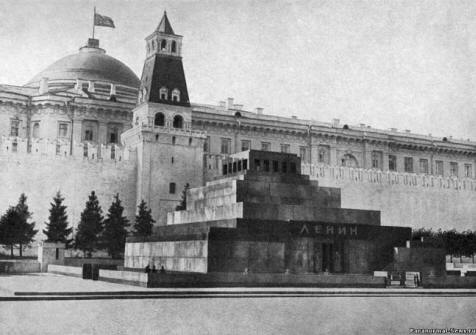 Famous modernist architect takes on the sarcophagus project K.S. Melnikov, clearly dedicated to all the intricacies of the plan. B.I. Zbarsky to a direct question, who first came up with the idea of immortalizing the leader’s body, he always evasively answered: “Spontaneously”.

Professor Zbarsky “invented” the recipe for embalming in three days, although the same North Koreans, having much more advanced technology, worked on the conservation of Kim Il Sung for over a year. Then there is a recipe for Zbarsky again someone, apparently, suggested. And so Professor Vorobyev, who helped Zbarsky, and also by will and will not knowing the secret – quite soon “accidentally” died in surgery.

Schusev himself explained (in “Stroitelnaya Gazeta” No. 11 of January 21 1940) – he was instructed to accurately reproduce the form of the second (wooden) Mausoleum in stone: For five years, the image of the mausoleum became famous in all corners of the globe. Therefore the government it was decided not to change the architecture of the mausoleum – I was instructed accurately reproduce it in stone. That is, in other words, who actually “Designed” case, covered in mystery.

“If individual periods are accompanied by decay and the withering away of the parts of the body, then so are the general periods of nations associated with the death of individual parts of the “national body”. … the organic bodily immortality of an individual is only possible for account of the whole nation as a whole. “Paul Kammerer (German: Paul Kammerer; August 17, 1880, Vienna, Austria – September 23, 1926, Puchberg am Schneeberg) – Austrian biologist occultist.

Krupskaya (wife of Blanca-Ulyanov) when she was shown the mummy after the next parade, she once said that “Vladimir Ilyich looks like alive. “His face even turned pink while he was lying in front of crowds of demonstrators. Ziggurat is a ritual architectural structure tapering up like a multi-stage pyramid – the same as standing on Red Square. However, ziggurat is not a pyramid, because it has on top there is always a small temple.

The teraph is a kind of “sworn item”, “collector” magical, parapsychic energy, which, according to magicians, envelops the teraphim with layers formed by special rites and ceremonies. These manipulations are called “the creation of the teraphim,” because – it’s impossible to “make” a teraph. 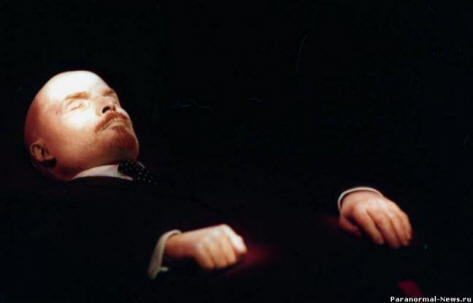 By analogy with the manufacture of teraphim in other cults (Voodoo and some religions of the Middle East) inside embalmed head (in the mouth or instead of the removed brain) was most likely placed a gold plate, apparently of a rhombic shape, with magic ritual signs. It contained all the power of the teraphim, allowing its owner to interact with any metal on which in one way or another were drawn certain signs or image of the entire teraphim: through the metal in the contact of a person seemed to spill over the will of the owner of the teraphim: under fear of death, forcing their subjects to wear “diamonds” around their necks, the king of Babylon to one degree or another could control them owners.

It’s easy to see that the hands of a mummy in a ziggurat on Red Square, stacked in the form of mudra. Despite the fact that the mummy is regularly rinsed in bathtubs with different solutions and change clothes, Blanca’s hands each time “accidentally” put in the same position. However, “randomness” is explainable in terms of interaction with subtle energies. According to the doctrine, an open left hand accepts energy from the outside, and the right, clenched into a fist, closes in the body and converts it. In the photo we cited above, this is quite it is seen. Mausoleum with a cut edge The profile of the Mausoleum coincides with the scheme of the simplest television antennas – they used to be on roofs, and everyone had them in the house. Similar antennas still stand on the radio and telemasts. Principle their pyramids are simple: such staircases reinforce signal, each subsequent circuit adds radiation to the power. Naturally, ziggurat does not transmit radio waves like an antenna. But physicists have shown that radio waves, sound waves and waves in liquids have a lot in common. They have one basis – the wave. therefore the principles of operation of all wave devices are the same, whether waves sound, light or wave of some strange radiation that today for convenience they call it energy-information.

Please note: the ceiling of the “mausoleum” is also stepped, like outer pyramid. This is a circuit in a circuit that works by type amplifying transformer. Modern instruments have shown that internal angles draw information energy from external spaces, and the outer ones radiate it. That is the ceiling of the tomb absorbs energy, the top superstructure itself – radiates (there several tens of short external corners-edges). What kind of energy are you talking about? See for yourself: There is another angle in the “mausoleum”. In fact, it’s not even angle, and three angles: two internal, drawing energy like a cup, and the third is external. He halves the recess, heading out like a spike. This is more than an original architectural detail, and the part is absolutely asymmetric – it’s one such triple angle. And it is aimed at crowds marching to the “mausoleum”.

Such strange triple angles are called psychotronic today. devices. The principle is simple: inside corner (e.g. corner rooms) draws in some hypothetical informational energy, external angle (for example, the angle of the table) – emits

The walls are faced with granite, which has quartz in its composition. Quartz crystals are used in any digital device and called quartz resonators. They are a plate with sprayed areas of silver, to which the conclusions are welded. Quartz has the properties of a coil and a capacitor. Attached to it voltage, its plate changes geometric dimensions when removed voltage, it restores shape, while on the findings there is a potential difference. Quartz resonator is used as particularly stable clock component for processors.

How does the mausoleum work?

This device needs energy to operate. She is taken either from land at the intersection of the Hartman grid lines, or from the outside source – people. This energy is modulated by a corpse in the mausoleum, introducing information that is alien to us and is emitted from the gaps above.

In the early 20s of the last century, Paul Kremer published a series of publications in which operating with such a purely abstract on that the moment with a thing like “genes” (they didn’t know about DNA then) deduced a whole the theory of how to influence the genes of a population hypothetical radiation expelled from the dead or dying tissues.

By and large, it was a theory on how to ruin gene pool of a whole nation, making people stand for a while in front of a specially treated corpse or relaying “radiation” of this corpse to the whole country. Clean at first glance theory: some “genes”, some “rays”, although such magicians the procedure was well known back in the days of the pharaohs and controlled by the laws of asymptotic magic.

According to these laws, the appearance and well-being of the pharaoh is somehow supernaturally relayed to his subjects: ill Pharaoh – sick and people, made Pharaoh some kind of freak and mutant – mutations and deformities began to appear in children throughout Egypt. Then people forgot this magic, more precisely – people actively helped it to forget. But time passes and people understand how the DNA system works – understand from the point of view of molecular biology.

And then another few decades pass and such science as wave genetics, such phenomena as DNA solitons – that is, super weak, but extremely stable acoustic and electromagnetic fields generated by genetic cell apparatus. Using these fields, cells exchange information both with each other and with the surrounding world, including, turning off or even rebuilding certain regions of the chromosomes. it scientific fact, no fiction. It remains only to compare the fact the existence of DNA solitons and the fact of visiting a ziggurat with a mummy TENS OF MILLION people, the vast majority of whom are Russians.

When in ancient Rome pagan emperors were tired of Jewish riots, then they used a very specific magical methodology. At 132 AD after the suppression of another rebellion by order Emperor Hadrian Jerusalem along with the temple was destroyed until grounds, then the area around the city was plowed by a plow in a circle. After that, the pagan priests spent the whole designated area rite of cleansing the area of ​​unclean forces.

Finally, pagan temples were laid in solemn form, and the city received a new name Eliya-Capitolina. The Romans knew what to do, therefore, we can well use their tradition. Mausoleum need tear to the base, uproot all components from Red Square the so-called “revolutionary necropolis” and removed from the towers of the Kremlin satanic stars. After that, flatten the earth around this place and conduct a purification ritual to expel demons and remove cadavers sewage.