The story of Noah’s Ark and the Bible Flood is known to everyone, but most people think it’s a myth. However, Robert Ballard, a famous underwater archaeologist, believes he has found evidence that this story is based on real events. 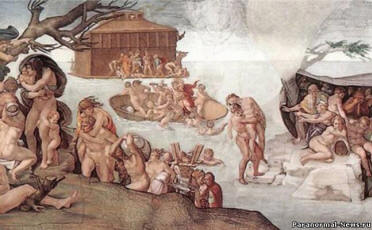 Open source photo Robert Ballard, professor of oceanology and underwater archaeologist, became famous thanks to his outstanding finds: in 1985, he discovered the wreckage of the Titanic liner at help devices on the remote control. Now ballard uses even more advanced technologies to commit travels to the distant past. Underwater archaeologist intends to prove that the Biblical flood or its analogue actually happened. “12 000 years ago, most of the world was covered in ice. Where I am Now living in Connecticut, there was just a big ice cube. But then the glaciers began to melt, which led to an increase in the level of the oceans. We asked ourselves – was this the same flood of the world? ”, – says professor of oceanology. According to the controversial theory, put forward by two Swiss scientists, the Black Sea was once isolated freshwater lake surrounded by agricultural land, but as a result of melting glaciers the Mediterranean Sea collapsed on fertile lands with a force two hundred times greater than power Niagara Falls, and buried in the abyss of all living things. “We went to the Black Sea and using unmanned robots, discovered at a depth of 400 feet (122 meters) an ancient coastal line. Having done the radiocarbon analysis, we came to the conclusion that The disaster occurred more than 5,000 years ago. In addition, we found the remains of mollusks that have ceased to exist for 7,000 years back ”, – describes the findings of the research team Ballard. Many scholars and archaeologists were skeptical expedition, and to its results. But that did not cool the ardor an underwater archaeologist who returned to the waters of the Black Sea. “We focused on finding structures resembling artificial structures made by people. At first, our remote devices found piles of ceramics, but then we came across perfectly preserved materials resembling wood. Looking closely more carefully, we realized that before us are the remains of the femur. We also found the remains of an ancient shipwreck. All these objects are perfectly preserved due to the fact that in the waters of the Black there is practically no oxygen in the sea, which means the process of decay significantly slows down. I don’t think I can find Noah’s ark, but I’ll definitely prove that there was a global flood. we back to our research site to find the flooded villages and the remains of their inhabitants, ”said Robert Ballard.