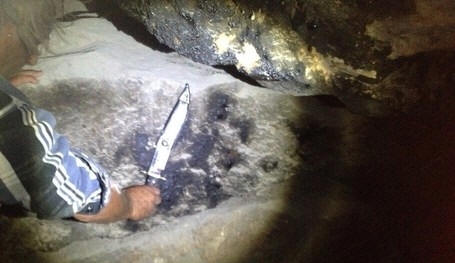 This discovery was made by two Bigfoot hunters in cave in Nevada, believing that they have found new evidence that Giant cannibals once lived here. They believe that their the discovery of a huge, charred handprint confirms earlier put forward theories that legendary caves lived in these “red giants.” Excavations in a cave in the eastern part state of Nevada they found this unusual imprint that for centuries was buried under 250 tons of bat excrement. Also discovered several giant bones under an almost two-meter layer feces. Presumably, these are the remains of a tribe of payuts, red-haired cannibal giants. Legends say that the last remaining giants were burned alive in a cave thousands of years ago, reports 24ukrnews.com.