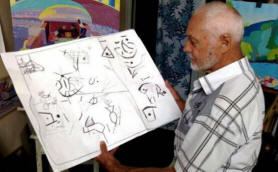 A scientist from Adygea Nurbiy Lovpache deciphered the mysterious symbols and inscriptions in the form of petroglyphs and hieroglyphs on recently discovered Loozy plate dating from the Bronze Age. In his opinion, this is about the soul and the afterlife, which once again confirms the funerary function of megaliths of the Western Caucasus.

N. Lovpache immediately determined that the symbols refer to protopisnosti ancient civilization. According to some estimates, The result of this study may be a scientific sensation. Discovered ancient inscriptions and drawings on the Loo plate can testify that writing was born in the Caucasus much earlier than is commonly believed.

Prior to this, the most ancient monument of writing was Maykop plate, whose age is 3.2 thousand years. Supposed the age of the Loošská plate is 4 thousand years, the boundary of the 2nd and 3rd millenniums before ad. So far this is only a hypothesis, but it has the right to existence, further development, study and proof, believes the scientist.

An artifact weighing about half a ton was discovered near a mountain stream in This May, near the village of Loo in Sochi. As Nurbiy suggests Lovpache, a plate of fine-grained sandstone 50 x 60 cm thick about 22 cm as a result of landslides moved into a ravine between two roads, where local historians found her. Among them – representative of the Shapsug community Khusht Madin and Sochi Andrey Kizilov – employee of the Department of Archeology of the Adyghe Republican Institute for Humanitarian Studies. They passed this plate to National Museum of RA.

For two months, Nurbiy Lovpache decrypted each symbol and established their relationship based on the Hittite hieroglyphic writing. According to the scientist, the stove is stratified into two a fragment, on each of which there are inscriptions of funerary significance, clearly visible celestial bodies, ship, fish, deer, grille, dolmen facade, etc. After a careful study of Nurbia Lopache managed to decipher them and build a coherent text.

“On the first fragment it is written:” The soul of a great prophet, famous archer. In 11 half moon, the soul of Muksa reached pseuna (House soul) “. On the second fragment -” With respect to the soul of great-grandfather Asitavad and the priestesses. In sunny water we went to Pseong, “said Nurbiy. Lovpache. 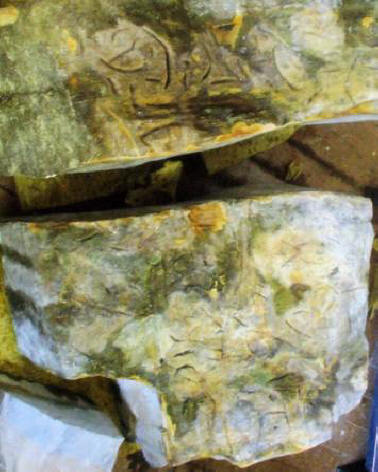 He also noted that the inscriptions are read from right to left or from above. way down. The scientist added that around the inscription are shown explaining it. drawings. One story – a deer on a pole – this is a royal funerary a symbol characterizing the ancient Maykop culture (only in it in bulls are mostly present). Another story is a seven-pointed star, also characteristic of Adyghe folklore.

“In addition, the grill is depicted on the stove – this is agricultural symbol, clearly visible and a boat with a mast, dolmen facade, fish, denoting the afterlife. It can be assumed that this plate was part of either a dolmen or a sanctuary. And the ancestors of the Circassians – megalith builders and founders of dolmen culture, “said Nurbiy Lovpache.