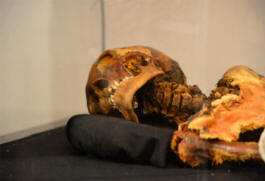 The legendary mummy found in 1993 in Altai, on the mountain Ukok plateau, located on the border with Mongolia, which the media dubbed the “Princess of Ukok”, can not be an ancestress Altai, scientists said. According to the director of the Novosibirsk Museum Archeology and Ethnography SB RAS Irina Salnikova, she belongs to Caucasian race. The expedition of Novosibirsk archaeologists led by Natalia Polosmak and Vyacheslav Volodin discovered on the Ukok plateau burial mound of the Scythian era, and in it – the mummy of a girl. She lay on her right side, with legs slightly bent. Girl body was dotted with tattoos, in particular, on her shoulder was griffin tattooed. Her vestment was a shirt of finest silk, woolen skirt, felt socks, goat coat and wig. This outfit was complemented by gold and bronze jewelry. The ritual weapon found on the mummy indicated that the woman most likely was a warrior. Tall, about 170 centimeters, growth and subtle aristocratic facial features betrayed her belonging to a noble family … All this cast doubt on the fact that during life this person belonged to the Mongoloid race, because the ancestors Altai people, apparently, were cheeky and squat, wore instead of clothes, lamb skins did not possess the art of processing metals. The tomb lurking among the rocks covered with drawings of five- six thousand years ago, was cut down in permafrost and closed on top of a log house. Coffin from a single piece of wood, boarded up with bronze nails, it was covered with pieces of ice. This allowed the body of the deceased to remain incorrupt for many centuries. 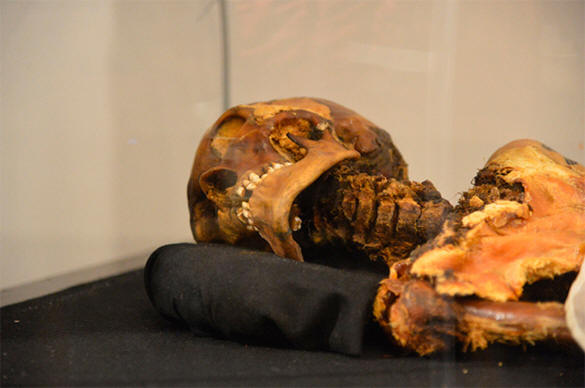 This find (the age of the mummy was determined in more than 2.5 thousand years) became one of the most sensational discoveries of the twentieth century. how it turned out that the locals had long known about the existence of a burial place. According to old-timers, the mummy belonged to the ancestor of the Altai, an ancient warrior who once defeated the enemies who attacked her native land. When she died, her spirit began to protect the people from troubles. Some call her “Princess Kadyn”, others call her “Princess Ochi-Bala” … The mummy was sent to study at the Museum of the Novosibirsk Institute archeology and ethnography, where numerous research. In September 2012, the “princess” was transported to National Museum named after Anokhin in Gorno-Altaisk. Through scientific teams led by an expert from the Moscow Center for Biomedical Technologies (VILAR) Vladislav Kozeltsev managed to keep colors skin and tattoos on a mummified body. Meanwhile the place where the grave of “Princess Kadyn” was located is considered sacred, and Kadyn herself, respectively, is a saint. When the burial was discovered the old people said that you can’t touch him – for this can overtake severe punishment. The prophecy about the punishment as if immediately began to be fulfilled. When the mummy was sent to Novosibirsk, a plane appeared on the way malfunction and he was forced to crash landing that was taken as a sign from above – the “Altai Princess” is not I wanted to leave my native land! However, people did not heed the warning. And in the fall of 2003, a series of underground aftershocks. Several villages were destroyed, serious relief changes, new reservoirs of hot water have arisen … Really Has this picturesque land been struck by something like the “curse of the pharaohs”? Only it would be more correct to call it the “curse of the princess Ukok.” But that is not all. After the mummy was conceived in 2006 on time to export to Germany, a series of European countries swept large-scale floods … accident? Recently council of elders Of the Altai Republic appealed to the authorities with a request to bury the mummy in the former resting place. However, recent research questioned the myth of the “Princess of Ukok.” The fact is that DNA tests finally confirmed: “Princess” belongs to Caucasian race, and therefore, can not be “mother” of the Altai. Who was she? Perhaps the ruler Scythian origin, and maybe a shaman. By the way, in Recently, the version that the Scythians were actively promoted the ancestors of the Slavs, or at least related to them … one curious hypothesis – they say, the famous “Scythian gold” is hidden just somewhere on the Ukok plateau, near the Kadyn burial … “This is a unique material that is still being researched, and talking about the return of the mummy to the earth is ridiculous – it’s some kind of medieval obscurantism, – the director of the Museum commented Archeology and Ethnography Irina Salnikova. – Let’s all then bury the archaeological sites. ”