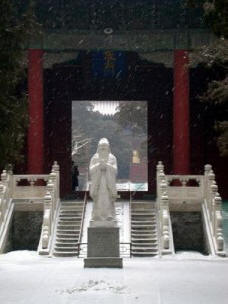 One of the followers of Confucius Mencius claimed that people born with conscience. He believed that people are born with empathy, with the concept of shame and the notion of what is right and what is not. These qualities are seeds. goodness, devotion, decency and wisdom. Only animals are not born with the natural quality of good. Man with shame will increase its morality, faced with temptations fame or fortune.

In ancient China, people believed that a person with a concept shame, determined to make the right decision, choosing between wealth and poverty, gain and loss, or devotion and personal interest. He will not allow his desires to take up. Man without shame is capable of any crime.

Once Confucius praised the three wise men who experienced a sense of shame, no matter what they do. In ancient China, it was believed that a person who feels shame will not be tempted by money, and not jeopardize their integrity in the face of fear or danger. He is humble and good-natured.

He is inferior to others, he takes only what he needs. Is it his personal ethics, the pursuit of something, or patriotism, the meaning of the human sense of shame is a prerequisite for having a moral conscience.

Confucius said: “Man must limit his behavior the concept of shame. “He also said,” Feeling shame is akin to courage. ”

Scientist Lu Kun, who lived during the Ming Dynasty, believed: “Even the threat of five tortures cannot be compared with a feeling of shame. ” strict criminal law and the worst punishment will not be able to teach feeling of shame. Lu Kun believed that teaching people to feel shame much more important than the imposition of serious punishments. Once people’s ethical level will rise, they will have an idea about shame, they will know what they should and should not do, and they can distinguish what is right and what is not. This method is much more effective. in crime prevention than punishing people after when they commit them. This is one of the reasons why Confucianism preaches teaching to prevent crime.