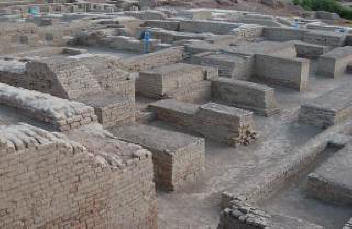 The first megalopolises of our planet did not have enough water. New research by archaeologists at the University of Cambridge and the Hindu University of Varanasi allow us to conclude that the oldest civilizations on Earth that existed in India and Pakistan in Bronze Age, disappeared due to … global warming. Megacity in Indus Valley and Northwest India, existed in 3 Millennium BC, came to desolation as a result climate change, which has become arid. This sad thing happened event in the 21-20 centuries. BC. Archaeologists believe that a series of strengths droughts in the Indus Valley region, lasting about 200 years, led to the rapid decline of urban civilization in this region, that existed more than four thousand years ago. results studies of English and Indian scientists coincide chronologically with other studies that analyzed the samples, taken from the bottom of the Arabian Sea and the Gulf of Oman, as well as stalactites from caves in northeast India and south Arabian peninsula. Now historians believe that severe droughts at the turn 3 and 2 millennia BC, partially, at least, to blame the disappearance of not only the civilization of the Indus Valley, but also of Akkad empire in Mesopotamia, the ancient kingdom in Egypt and the early ancient Greek civilizations of the Bronze Age. British and Indian scientists have analyzed samples taken from the bottom of a dried lake not far from Delhi. The capital of India is only 60 kilometers from eastern border of ancient Indus civilization. Isotope analysis calcium in the shells of snails living in the lake, allowed to establish the amount of water in it. They concluded that at approximately 2100 – 1900 BC in northwest India was very dry. At the same time, large cities, whose population reached 100 thousand people rapidly fell into decay. Civilizations existed for five centuries, disappeared, writes Independent with reference to Geology magazine, which published the results research.