The remains of an ancient crust found on a volcanic island, say that the material in the mantle is not mixed too much intensively. Chemical residues of the earth’s crust, plunged deep into the mantle, over time can again go on surface in a completely different place – for example, on some distant volcanic island. Analysis of volcanic rock on one from the islands of the South Pacific allowed scientists to suggest that this process takes more than 2 billion years. 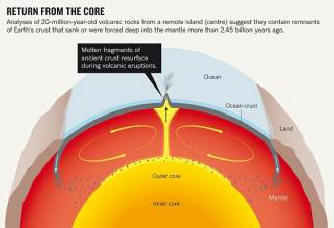 The remnants of the earth’s crust, which sank about 2.5 billion years ago, again rose due to the upward flow in the mantle. (Illustration Nature.) Co-author Rita Cabral of Boston University (USA) notes that the chemical and isotopic composition of the mantle varies from place to place. Perhaps this is the result of dropping pieces of bark, but no concrete evidence has yet been received. Behind them researchers went to the island of Mangaia – the southernmost of Cook Islands. Local volcanic rocks formed around 20 million years ago, strongly weathered, but sulphurous minerals, contained in olivine crystals resistant to weathering and formed at a depth of several kilometers, still stored the “chemistry” that preceded the eruption that brought them to surface of the planet. And the composition is eloquent! For example, Ms. Cabral notes that the proportion of the sulfur isotope-33 is much lower than that typical for the earth’s crust. Although this anomaly can lead to biological processes, the latter would simultaneously create abnormally high concentration of sulfur-34, but this is not the case with samples from Mangaia. The most likely source of rocks, sulfur-poor-33, scientists consider mantle material that contains bark residues, sunken or otherwise found below the surface of the planet in at least 2.45 billion years ago, even before photosynthetic organisms began to pump the atmosphere oxygen. When there was little oxygen, chemical reactions, occurring under the action of sunlight in a natural way should have created low sulfur compounds sulfur-33. Later, the ozone layer resulting from the oxygen disaster suppressed these processes. At some point, material with the boundary of the crust and mantle rose again with the so-called mantle plume (upward flow). Ms. Cabral asks to pay attention to the low intensity of mixing of the material in the mantle, because this piece of rock came back to the surface in almost the same the form in which he sank. Perhaps in the mantle you can find the whole “cemetery” of ancient lithosphere plates untouched by time. Is it possible consider the data obtained as evidence of the existence of tectonics by at least 2.45 billion years ago? Researchers are in no hurry to do such a conclusion. According to them, at that time the planet was still young and hot, so this section of the cortex could not sink due to subduction (the entry of one lithospheric plate under another, as this happens today), but in some other way. Indeed, geochemist Robert Stern from the University of Texas at Dallas (USA) believes that low sulfur-33 material could not form on Earth’s surface, and in the “underbelly” of the continental crust, after which fall off and sink in the mantle. Something similar happens here and there now. The results of the study are published in the journal Nature. Based on materials from Nature News. Island Time USA