Authoritative in the world scientific community journal Nature published the second from the beginning of the XXI century sensational work on discoveries in the field of anthropology made within the borders of Russia. Five years ago, “shook the basics” genetic analysis of fragments “Denisovan” – a new, as it turned out, type of man: phalanx of the finger girls, unusually large molar tens of thousands of years rested in the Denisova cave in Altai. Now it turned out that north, at 58th latitude, 45 thousand years ago we entered (it may well become, and lived here year-round) representatives of Cro-Magnons – early representatives of modern man. Formerly leading anthropologists did not even allow the thought to ask a question about existence in then the time of man in the designated zone of Siberia. Fruits of integrated studying the bone of the “Ust-Ishimts” (such a nickname received a low a man who hunted and fished in the territory of the present Ust-Ishim district – at the junction of the Omsk and Tyumen regions) enthralled many scientists of the planet. They were pleasantly surprised that in so ancient Cro-Magnon bone perfectly preserved DNA. Apparently Cold saved. Genome decoding made it possible to clarify the period crossing a modern man with an endangered Neanderthal, whose genetic share in the average resident of Eurasia today is about two percent. So, “sinned” ancestors about 50-60 thousand years ago. In connection with the Denisovans, our “Siberian” did not enter. He is definitely a relative of the Eurasians. Only, let’s say for the French, he is very distant, and for the Chinese nationalities han and dai – quite close. That is closer to Asians. In fact, the “Ust-Ishimets” is a separate branch Homo Sapiens settled outside Africa. Judging by the available data, did not leave direct offspring. Ust-Ishimets gave additional reason for discussion about the abilities of “man unprotected “to survive in harsh climates and migration routes to spaces of the continent. Professor from the USA Sarah Tishkof figuratively called the Ust-Ishim find a time machine that allows both never before to look deep into the Cro-Magnon genome. The article in Nature – 28 authors. In the international team – six Russians. They are from Tyumen, Novosibirsk, Omsk, Yekaterinburg. Such many names are not surprising – work required concentration the efforts of a number of research laboratories. So, DNA analysis conducted by a group of professor Svante Paabo Institute of Evolutionary anthropology in Leipzig. RG correspondent has interesting details told a junior researcher at the Institute for Development Issues North Siberian Branch of the Russian Academy of Sciences Sergey Slepchenko and Director institutions, head of the laboratory of anthropology and ethnography Anatoly Bagashev. By the way, that treasured bone is locked in one of the safes Institute. From hip to opening 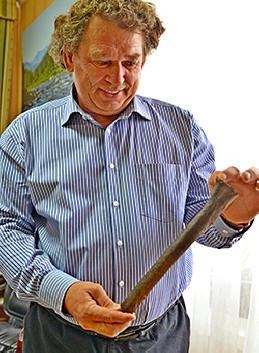 Photos from open sources To the sensational discovery in the world anthropology led a happy combination of coincidences. Omsk bone cutter Nikolai Perestov periodically goes in search of ornamental raw materials – the remains of a mammoth, bison. In 2008 on the outskirts of the village of Ust-Ishim, wandering along the banks of the Irtysh, Perestov picked up “just in case” a 35-centimeter tubular bone, not recognizing the human in her, otherwise I would not have taken it. She dusted for a couple of years in a bag with other finds. Once in an artist’s workshop his good friend Alexey Bondarev, a paleontologist, looked in expert criminalist. Examining fragments of skeletons, he exclaimed: “Oh, femoral, from a relative!” He suspected that “relative” lived many millennia ago. Then who is he – Homo Sapiens, Neanderthal or, what the hell is not joking, “Denisov”? Alexei suggested solving a riddle to the Tyumen colleague Sergey Slepchenko. -Rejected Neanderthals immediately – they have several another anatomical structure of the femur. Her kind testified of a man of a modern type. Spent radiocarbon analysis for the duration of the “exhibit” – gasped. FROM anxiety awaited the results of a genetic study. It confirmed The result is 45,000 years! More precisely, about one and a half thousand years You can add or decrease, – Sergey explains. Struck not age as such, and its combination with the geography of the find. Hitherto nobody and it never occurred to me that in such a long era in this region Western Siberia could exist man. Oldest material evidence of his stay in Irtysh – detection of parking lots, stone and bone tools of 15 thousand years ago. – It was supposed what in an earlier period gigantic areas flooded with river waters, the path to which the natural dam blocked the Arctic – glacier. Erroneous view: there are numerous facts of living here mammoths, other large animals. Near Tobolsk, for example, discovered the remains of a bison frolicing here for another 39.5 thousand years back, – Anatoly Bagashev brings his arguments. In the same Sergey Slepchenko thinks in a logical way. – How much then was coldly? Winters are snowy, but not long, with moderate frosts, warmer than now, say climatologists. Man could not wait for the onset of cold weather – fall kilometers to fall 500-600 south. Then again return to places with an abundance of animals, fish. He consumed both of them in a fair amount. As known, predominantly food shortages forced a Paleolithic man to develop new territories, advancing thousands of kilometers, – argues the scientist. Opponents cite the lack of stone in low-lying marshy areas of Western Siberia. Which supposedly without him hunting? – The natives of the North in antiquity arrowheads, spears were made of bone. Is the “Ust-Ishimite” was not able to make them from the bones of a mammoth, a rhino? (In later ages – Mesolithic, Neolithic – stone in Western Siberia has not increased, but people lived). Yes, there is no material evidence for this yet. Need to look for it. FROM given that they are all hidden under the earth. Well, still river water can bare something. Then anthropologists should be called soon! Somehow the news came to us: the residents of Ishim found an unusual the pelvic bone is heavy, blackened with time. Local the radiologist held it in his hands, threw it away. We are then with the group students climbed all – unsuccessfully, – Anatoly shrugs Bagashev. This summer, the banks of the Irtysh inquiringly examined dozens researchers. Among them, Nikolai Perestov. He recalled that not far from the tibia matched by them lay human vertebrae: “I glanced and went away. Oh, I should know!”