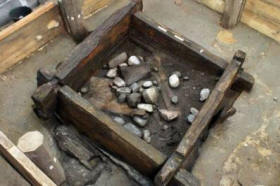 Archaeologists have unearthed the oldest well in Europe near Leipzig. People dug it more than 7000 years ago, fortifying the walls with logs from oak to provide itself with water. The find suggests that man long before the invention of the first metal tools could create complex wooden structures, media reported. The first builders were probably also the first carpenters in Europe, Freiburg archaeologist Willie Tegel said in Plos magazine One According to the researchers, the well is the oldest in the world. preserved wooden structure. This suggests that society at that time was at a higher level of development than previously thought. At the beginning of the Neolithic people dug a hole up to seven meters depth and overlaid it with a tree. They split the logs and then connected teos angular connection, making the shaft of the shaft. “Such sophisticated technology was a big surprise, “wrote Tegel. Four Neolithic wells were built from 6000 to 4000 years BC e., when, according to experts, fundamental changes in human history. At that time people started abandon the life of hunter-gatherers and gradually began to go to a settled lifestyle. To create permanent settlements and agriculture needed fundamental technical innovation. But the wooden houses of that time did not preserved. Thus, experts can only guess how looked the life of the early farmers. Therefore the discovery of four wooden wells is of great importance, said Tegel. Just because the wooden boards were below level groundwater and were deprived of oxygen, they survived millennia. On the Based on tree rings in wood, scientists were able to determine the year, when the trees were cut down: from 5206 to 5098 BC. e. Finally, the scientific understanding that has existed so far about our ancestors, should be reviewed, said Tegel. “All remodeled buildings of this period and infrastructure were probably underestimated. If people were able to carry out such complex processing timber, it is necessary to review the reconstruction of buildings, “said archaeologist.