Like the Platonic Atlantis, the Argentine city of Lago-Epécuen once gone to the bottom. And now he rises from under the water. Miracle Lake Concentration of salt in Argentine Lake Epécuen in tens of times higher than in any of the oceans. If there is anywhere in more saline water in the world – this is only in the Dead Sea. Sick, lame, unfriendly, who have already given up on doctors or who do not money for expensive Aesculapius – they all sought to the coast of this lake, whose name Epekuen translates as “eternal Spring”. The blind return from here sighted, the lame leave become crutches unnecessary to them, centennial elders, plunging into the waters of the lake, start to drag after young women. Epequen gives to man the second life and the only thing that is impossible here is only the resurrection of the dead. National Resort Towards the end of the 19th century Argentinean doctors strongly recommended that their patients visit Epekuen, whose therapeutic mud and water treat rheumatism, depression, anemia, skin diseases, and all other diseases except maternity fever. Tents and first houses appeared on the shore of the lake. By 1920, the village gained the status of a city and a fashionable resort. At Europeans was Baden-Baden, and the inhabitants of 600 km Buenos Aires traveled to Lago Epecuen. Soon the glory of the resort town went beyond Argentina. Every year on the banks of Epecuen one new hospital and two new hotels appeared. In town spent the railway, but the flow of tourists was so great that had to pave another 2. On the verge of disaster By the middle centuries, urban problems began to be identified and exacerbated, and the main thing – lack of fresh water. Every resort, plunging into a salty brine, after that he was looking for a shower to wash off the salt crust. Water the city was sorely lacking. The popularity of the resort has become fall. To solve the problem, a reservoir was dug near the city and connected it with the nearest fresh lake. The city gained a second breath. In the early 70’s, the resort took in season up to 25,000 vacationers, the population of the city exceeded 5,000, the city prospered about 300 firms. Hotels, museums, shops. But nature did not forgive people unceremonious interference in their lives and began to take revenge. IN mid-70s, city officials became worried. If before them bothered by the retreat of the lake from the city, now on the contrary, water attacked the city. The fragile balance of a complex underground the hydraulic system was broken and now man I had to pay for my self-confidence. Around the city built an earthen dam. Every year the lake level rose, Every year an earthen wall grew. The city goes under water 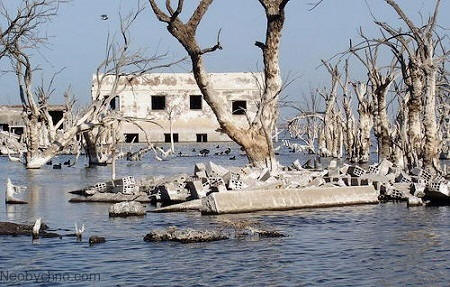 In 1985, it rained for months and on the night of November 10 the waters of the lake swam across the edge of the dam. The city did not sink to for one night like Atlantis. Flooding created problems, but didn’t kill the city right away. City authorities developed a set of measures, necessary to save the city, but the most far-sighted began collect things. After 15 days, when the water rose 2 meters and reached the roofs of houses, the last inhabitants left Lago-Epekuen. TO 1993, the city was already at a depth of 10 meters. Rose from the bottom In 2009, the lake began to gradually return the city to people. Former Epecuenians began to return to their homeland. Scary picture they saw. Instead of the city, there are only ruins around which, as if white bones are dead salted trees. Of all the arrivals only one 81-year-old Pablo Novak began to unpack his bags and settle in a new / old place. Everyone else left back. A photo from open sources Is the city reborn? Yes, but … The Argentine government really intends to revive the city, but this revival will be somewhat peculiar. Restore nobody will be a resort town, Karoue has long since taken over his fame, where after the death of Lago-Epecuen Argentines go on vacation and medical mud. Now the village of Villa Epécuen will function as tourist site. Lago-Epekuen, who lost not only life but even your name will be kept in its present form as a reminder man, that he is not the king of nature, but just a toy in her hands.