The stove slides to the side, allowing access to the room. All space is laden with objects. There are dozens, hundreds material evidence of a world that has existed for more than 6,000 years back. After thousands of years of darkness, artifacts will again see the light and they will tell about the history, life and culture of civilization, for a long time which has not become history – a myth, a fairy tale, a legend. It will happen 28 May 8113 in Brookhaven, Georgia, USA. Hello from Tutankhamun Discovery in 1922 of the tomb of the pharaoh Tutankhamun became the most important archaeological discovery of the XX century. Newspapers shocked readers with descriptions of the sarcophagus from pure gold, weighing 110 kg, the golden mask of the pharaoh and the golden throne. Readers were shocked by the mere inventory of hundreds found in the tomb. jewelry: goblets, vases, necklaces – the total weight of the discovered gold in tons. Meanwhile, scientists reverently blew dust from objects seemingly unremarkable: stools, pillows, chairs, gloves. Bows, whips, boat models, fruit baskets, games – all these objects of stone, alabaster, clay, wood were not less valuable than gold treasures because they provided invaluable information about the life, customs and everyday life of Ancient Egypt. This prompted the president of Allthorpe University Thornwell Jacobs to collect a collection of objects of the XX century and send it future generations. The project was called the “Crypt of civilization.” IN 1937 Jacobs triumphantly announces launch on NBS Radio project. Almost three years went into the selection of subjects, regarding each There was a long debate. Jewelry artwork struck out list first. And what is left there? Content Crypts of civilization More than 800 books: Bible, Quran, works Homer and Alighieri and other world classics, works on history, encyclopedias, scientific works. Books written on cellulose acetate film. Scientific and technical instruments, newspaper filing. Selection phonographic recordings: voices of Joseph Stalin, Franklin Roosevelt, Adolf Hitler, Mussolini, musical compositions. Film reels, projector and reader microfilms. Fearing that in 8113 electricity will cease to be the core civilization, a generator is placed in Crypt to launch devices, able to work from the flow of water, and even in the most extreme case – The strongest magnifier for reading microfilms. Placed huge number of everyday objects: cash register, writing typewriter, dental floss, toaster, pacifier, children’s toys and lady’s handbag with all its contents. Sealed for 6,000 years 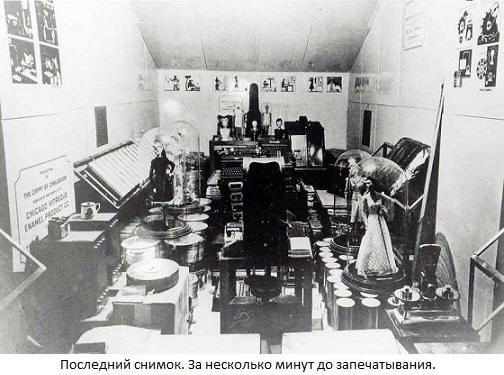 For safety, many items are placed in containers of inert gas filled stainless steel. The storage location was The basement in the building on the territory of Olgorp University was selected. A room measuring 20 × 10 × 10 feet is hermetic, has a stone ceiling with a thickness of more than 2 m. and half-meter stone floor and walls. 25 May 1940 in the solemn atmosphere of Crypt civilization was closed, sealed, stainless steel entrance door tightly brewed, a plate is installed on the door – an appeal to descendants. Date of opening – May 28, 8113. Who needs the package? We will not look in the 8113rd year, it is impossible. Who will open the sealed a room? Will it be our descendants? Or representatives of a different race, replacing humanity? Or maybe the treasury on the burned will nuclear war find and print guests from other planets? If so, then let then the history of a civilization that failed in time stop and destroy itself, will serve them formidable a warning.