Photo from open source In 1891, Erwin Barbor, a fossil researcher the remains of ancient organisms, accidentally discovered on the slopes of the cliffs in Nebraska has unusual fossils resembling a corkscrew. It looked like that someone, many millions of years ago, screwed a huge corkscrew, reaching a length of several meters, and after cement flooded the resulting holes.

For a long time, the paleontologist puzzled over the mystery of the “devilish corkscrews “- this is not a scientific name he gave his find. After the scientists put forward the theory that the fossils discovered belong to gigantic size sponges or algae that covered the bottom of an ancient lake 20 million years ago. 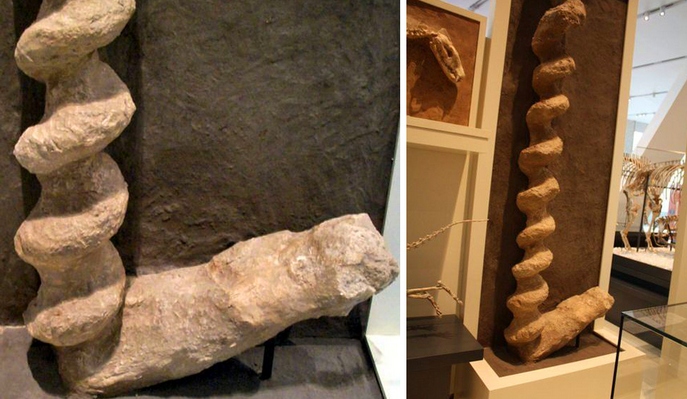 Theodore Fuchs, Erwin’s colleague, turned out to be more perceptive, assuming that “diabolical corkscrews” are animal holes, brought in by silt and as a result of many years turned fossilized. However, Barbour stood his ground, and in proof of his loyalty theory brought a weighty argument – no animal is able to dig holes in such a perfect spiral shape.

For a long time, Erwin Barbor’s hypothesis explained to paleontologists the origin of the mysterious corkscrews, however in 1904 the museum Carnegie’s natural history found remains inside a single spiral some animal, which was further classified as Palaeocastor.

It turned out that the creator of “diabolical corkscrews” is a distant ancestor We all know the beaver. Scientists have found that the age of the remains totals 23 million years. It turns out that Erwin Barbor was mistaken twice: in the nature of the origin of mysterious fossils and even in how for a long time they are in the ground.

Researchers suggest that a paleocastor belonging to sight of land beavers and not knowing how to swim, could not escape from the flood that caught him in the hole. Sludge-filled the spiral passages became harder than cement over time and after a lot million years puzzled by an inquisitive paleontologist.