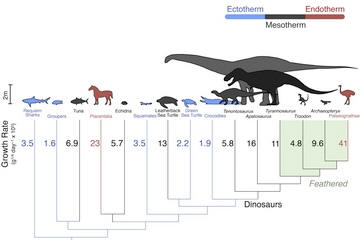 Dinosaurs may not have been cold-blooded as modern reptiles, and not warm-blooded, like mammals and birds. During 135 million years, they dominated the planet with blood, which was not cold, and not hot, being an intermediate type that in our time is extremely rare. Modern reptiles, such as lizards, snakes and turtles, are cold-blooded, or ectothermic, that is, their body temperature depends on the temperature the environment. Birds and mammals, on the other hand, are warm-blooded, that is, they control the temperature of their body, keeping her constant. In the case of man it is about 37 degrees Celsius (98.6 degrees Fahrenheit). Dinosaurs are reptiles, and for many years, scientists believed that they were cold-blooded creatures with a slow metabolism, dependent on the temperature of their habitat. However, some dinosaurs that became the ancestors of modern birds could fly that a priori should mean they have an accelerated metabolism and constantly high body temperature. To solve this riddle nature, researchers have developed a new method for analysis metabolism in extinct animals. The standard was taken as a basis method of determining the fluctuations of vital activity based on the study of annual slices. Like trees, quality and quantity years lived which can be determined by the rings on the trunk cut, animals have similar layers (rings) on the bones. IN case with determining the level of metabolic changes, scientists tried to determine not only the number of years lived, but also their quality, as well as other characteristics of animals, such as a set weight, body temperature and the like. For research were taken samples of modern reptiles, mammals and birds, as well as tissue extinct animals, including several species of dinosaurs. IN The result of the study revealed the following pattern – weight gain, otherwise – the growth of the animal, in the case of warm-blooded fauna was 10 times higher than growth cold-blooded animals. The situation with metabolism is similar: the ability to assimilate food in warm-blooded is ten times higher. However the same study found that dinosaur fossils grew faster, than their cold-blooded contemporaries – reptiles, but slower than warm-blooded animals. This pattern led to the conclusion that type of blood circulation of dinosaurs can be characterized as mesothermic – that is, the median between the ectothermal (cold) and endothermic (warm). Animals with this type of blood circulation can generate enough heat to support higher than the surrounding environment, body temperature, however, can not do it constantly. IN modern fauna such sharks can be attributed to such animals, tuna, several species of leathery sea turtles, and oviparous echidna. For example, the body temperature of tuna is always higher water temperatures, however, when the fish is immersed in colder deep water, her body temperature is proportional to the temperature of the water also decreases. Mesotherms have devices for preserving heat, but they do not burn stored fat and do not tremble so that get warm. Unlike us, in order not to freeze, they do not raise the speed of your metabolism. A role in maintaining heat body size also plays – here dinosaurs favorably differed from modern animals.