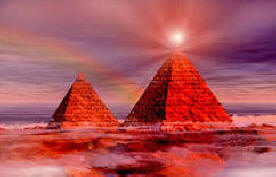 A natural question arises: do people have tools, able to protect them and remove the threat of impending cataclysm? The answer is clear: yes, there is. First and most an effective way of protection is to increase the spirituality of people, raising the level of field vibration, which will automatically ensure a smooth Transition to higher dimensions without disasters and passage of phase physical death. Such a scenario requires spiritual readiness of at least 50% of the world’s inhabitants. Despite, that in recent years the number of people who have reached the appropriate spiritual level, increased and is approximately 15-17% – this is clearly not enough to implement this scenario. Humanity may simply not be ready for the upcoming global events. There is another reliable way to protect people from the impending cataclysm is the activation of the pyramids and the pyramidal structures on the surface of the earth. A person with a certain share of skepticism, he will say that there are only one pyramid on Earth, and they are not able to effectively protect the planet and its inhabitants. Fortunately it Not certainly in that way. Through the efforts of alien civilizations (Sirius, Jupiter, Pleiades and others) from 800 to 500 years ago on Earth pyramids and pyramidal structures in the form of hills were erected and hills. Our older brothers in reason, predicting unreadiness of humanity at a critical moment in its history, when it will be at stake the very existence of civilization was put in place, they did everything to “lay straws” on people and give them a chance to protect themselves. The purpose of the pyramids of the Earth, mountains of a pyramidal shape and even hills – protection of our planet from hard cosmic radiation. Second them the task is to direct the energy of the Earth during the pole shift into special points of the planet – at the North and South Pole. Pyramids accumulate energy, creating energy information flows directed to Space, as well as provide the opportunity to receive information from space. Pyramids were erected in places of power. The purpose of their creation is harmonization of the environment, transmission and reception information flows. But the main thing is to protect the energy body Of the earth. Pyramids serve as powerful “locators” that guard the territory of several hundred kilometers around and above by myself. They are capable of damping seismic waves of earthquakes, to calm hurricanes and floods, do not allow to rage geological disasters. There is no doubt that the pyramids are capable of to influence the thoughts of people around them, being a place of initiation to a higher stage of the spiritual path. Small “pyramidal” hills act as a protective “hedges” of various regions of the Earth, including Primorye. Besides Moreover, it’s kind of “beacons” for the Pleiades spacecraft, Sirius, Orion, Vega and other stars. In Primorye there is a height, which is called “Height 611”. She served as a landing site for of a disc-shaped ship, but the materialization of the ship was unsuccessful. The protective function of the pyramids is directly related to the ethereal Earth’s protective network. The ether network over the Earth is weakened. With help pyramids can replenish the energy of the etheric network. Pyramids are capable strengthen the lattice, due to which the Earth can make incomplete a coup, not by 180, but by 60 degrees, which will significantly reduce catastrophic situation. The ether network will be energetically equally saturated over any part of the earth. Energy flows evenly distributed around the planet, without isolated sites. The only exception is the region of Siberia, where Energy Energy Crystal Earth. The crystal itself will take this area under reliable protection, ensuring the indestructibility of tectonic plates and lack of water flows. Higher civilizations of the subtle world through pyramids can help control fusion processes in the core of the planet. Pyramids are capable of receiving high frequency cosmic energy, transform it, and then send it to the core. The excess energy of the Earth (its core) is radiated through the pyramids into Cosmos, “feeds” the etheric lattice of the Earth, which protects everything living and delays the displacement of the axis of rotation of the planet. During displacement the axis of the planet pyramids can help mitigate the adverse factors. Their impact will affect the passage of the planet Nibiru near the earth. Pyramid activation is important given the possibility of shifting the axis of the Earth as early as 2013. To the study of the pyramids should be approached carefully. This should be done by enlightened people, able to pass through their bodies the corresponding energies. To activate the pyramidal hill, it is necessary on top stick a rock crystal into a natural pyramid, fold a cone-shaped addition to the top or a small pyramid from natural stones. It’s important to mentally pray, to feel that pyramid and man are united by common energies, hold these energies through the spine, through the energy channel. Need to imagine that you are a living pyramid with a top on your head and a base – crossed legs. The energy of the pyramid will be activated for the benefit of our the planet. “SECRET OF LIFE” Shikhov Ivan Mikhailovich