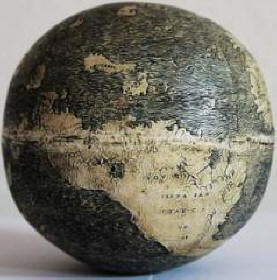 A recently found globe of the early 15th century carved on ostrich egg shell, according to experts, may be an ancient globe with images of the New World. Geographic the names are written in Latin, and two small islands located on the site of North America. Origin of the globe so far is unknown. Walking through the arms of a string of card dealers in Europe, the artifact was anonymously acquired in London Cartographic Fair in 2012. Subsequently, a rare find fell into the hands of the Belgian collector Stefan Messina, whom interested in the history of the globe, and he wrote about his acquisition article in Portolan, a Washington cartographic magazine society. Until then, the oldest was considered the Hunt Lenox Globe, made of copper and dated around 1504 and 1506 years. Both globes bear almost identical inscriptions and detailed shape, and Stefan Messina believes that this is not a coincidence. Between there is a difference between these two globes, but there is every reason believe that the Lenox globe could be a copy of an ostrich’s globe eggs, writes in his article Messina. In the history of the map makers resorted to a wide variety of materials: there were cards made from branches, and maps drawn on the skins of fur seals, on calfskin and wood blocks. However, ostrich eggs by no means were the usual material for this case, and for this reason, regardless of their age, this artifact is extremely valuable. 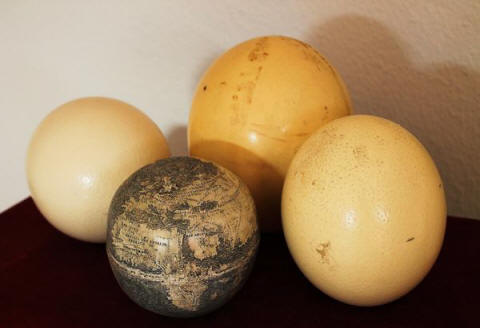 Photos from open Sources To evaluate the age of the shell, Messina consulted with a radiologist who helped him take a picture and compare the density of old shells (globe made of two halves) with new ones. Building on this comparisons, the radiologist concluded that the older part of the shell lost more than 50% of calcium deposits, and this is a sure sign of aging. Due to the similarity of the two globes, Messina hypothesized that A recently discovered artifact existed before the Lenox Globe. However, some cartographers relate to the age of the map found. very skeptical because of its ambiguous origin. Let be eggshell and can be dated before the 16th century, however it is not means that the map on it is the same age. “It may be one of the earliest globes, which in itself is extremely interesting, but its origin raises questions, – comments Studies John Hessler, Curator of Geographical and Library of Congress, Cartographic Division the main thing I want to know is where did this globe come from, where is it was acquired, who owned it before and in what collections he visited. I try to keep away from this race, which globe was before. ”