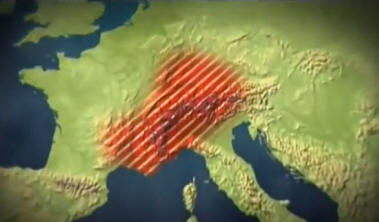 Germany and almost all of Europe can be called a huge cemetery Slavs. According to modern history, from around the end of VI until the middle of the 13th century A.D. east, north and northwest of modern Germany was inhabited by a large group of West Slavic tribes of Luzhans, Lyutichi, Bodrich, Pomeranian and Ruyan, which are now called Slavic Slavs. And the ancient names of modern German cities do not need explanation: Lubeck, Bremen, Weiden, Lübben, Torgau, Klutz, Ribnitz, Karov, Teterov, Malhin, Worlds, Rossov, Kirits, Beskov, Kamyanets, Lebau, Zebnitz, etc., etc.

In the XIX century, the Czech scientist A.V. Chamber, found 1000 Slavic names of rivers, mountains, forests, plains and towns on the map of Austria. The results of his research, he published in the book “Zapadni Slovane v praveku “(1860). It is appropriate to add here that the Austrian the capital of Vienna is the Slavic Vindeboz, and the town of Tsvetl is Svetla. Herself Austria was called before the Germanization the Principality of Ostria! Germans compiled a kind of catalog of Slavic cities and fortresses on territory of Germany and posted it on the site http://slawenburgen.npage.de, which is available, unfortunately, only in German. On it with German pedantry and even the coordinates of places are marked by scrupulousness, and places are shown Location of each city using GoogleEarth. On the the territory of modern Italy lived Etruscan, Venice founded Slavic people of Veneda, etc.