The traditions of the African Dogon tribe tell about the relocation of their ancestors to Earth from the stellar system of Sirius and the arrival of living creatures on Earth “in a spinning ark.” Similar other nations have traditions, however, discover amazing astronomical knowledge of a tribe lost in Africa has not yet had to … 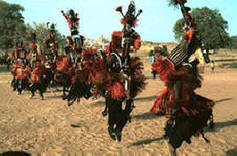