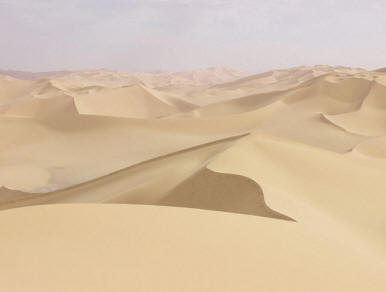 5 thousand years ago, the most famous desert of the planet – the Sahara, which spread its sands in northern Africa, was a green area full of lakes, hippos and giraffes. Why so greatly changed the face of the region? Thanks to recent research scientists have found that climate change happened all over almost the entire northern part continent. To understand the reason for such fundamental changes, the researchers needed to analyze the composition of the dust, which hit the waters of the Atlantic Ocean from the west coast of Africa. Scientists have studied sand on the coast, as well as land from the bottom of the ocean, which they specially lifted with the help of a drilling vessel. By the way the age of the analyzed sand is 30 thousand years – obviously that this sand has experienced a lot in its lifetime, and its study can much to give researchers. By exploring silt at the bottom of the sea, scientists can determine the change in the amount of sand in a given time period. Thus, we can find out how the climate of Africa has changed. In simple words, a lot of sand – dry climate, little sand – more humid air, which means a mild climate. Wet period The climate in this part of Africa began and ended rather quickly. This fact is confirmed by previous studies of sand conducted other scientists. However, by the end of the wet period, i.e. around 6 thousand years ago, sand in North Africa was 5 times less than now – much less than scientists thought earlier. This study will allow scientists to better understand the relationship between the amount of sand and the climate of Africa, explained the head research paleoclimatologist David McGee. He also added that in the result will be able to trace exactly what climate in Africa was in one or another period of time. Sand from the Sahara desert is most of the silt on the African coast. Moreover, this sand constantly “travels” and can even reach the shores North America. McGee is currently with his colleagues are trying to determine whether sand analysis will help long-standing problem: why can’t return to North Africa the humid climate that reigned there 6 thousand years ago.