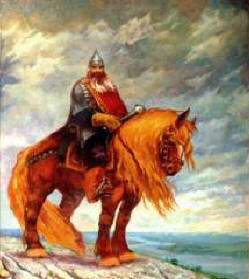 “I have not seen people with better bodies than the Slavs. They like palms, blond, beautiful face and body ”

Overcoming fear and hiding emotions, the young man proved his maturity. Then, relying on a difficult school of military training and the hilt of a knife, he went into the dense forest for the skin of a bear. Try to think for a moment and imagine in all colors the image of a huge forest giant roaring in front of you. Clawed heavy paws capable of breaking ribs in one motion and to tear the body, against one knife and human skill.

According to extant beliefs, defeating an angry bear, a young man turned into a werewolf warrior, as if absorbing the spirit of the murdered the beast. An amulet of bear claws hung on his neck. Such tradition strengthened the warrior’s endurance, giving him a strong psychological support in any situation. In specific games childhood passed, laying a little more than just a skill, but also something that is sometimes impossible to learn – fearlessness.

Games in the “king of the hill” grew into a wall-to-wall battle, and then in building battle formations.

Gradually, from simple to complex, from playing snowballs to evasions from a hail of deadly arrows, and from stick fights to cutting on swords. Guardianship of “uncles” ended after the initiation students in professional warriors. Of these, the perfect the army is a princely squad. Campaigns of the Slavs themselves – a phenomenon quite rare. But aggression from the outside is almost constant. And historically, the Russians were always forced fight in the minority. The professional army is numerous and should not be.

Therefore, the squad was forced to use any, even slight advantage. Warriors places used to fight in low visibility conditions and cramped space – for example, in a dense forest. From here and battle tactics, allowing you to fight alone, even in full surrounded by.

In order to impose it on a numerically superior opponent, it was necessary to have a special attacking combat skill, built on high physical activity. Such battle tactics and owned small, but strong squads of Russ. Traditions they say that one warrior went out to fight with ten, and sometimes with a hundred enemies. So he terrified the invaders, Demyan Kudenevich, rode alone into battle even without a helmet and armor. Probably a lot the Polovtsian army suffered fear, which he drove away from the walls Pereyaslavl with the help of six brothers.

The Nikon Chronicle broadcasts about the hero Ragdai: “Like a horse this one is three hundred warrior. “Evpatiy Kolovrat -” kolo “means a circle, or rotating in a circle – personified the battle technique with his skill a lone warrior, penetrating into the thick of the enemy and detecting all, scattering opponents in a circle.

The warrior who fought alone is the highest degree of military craftsmanship, which has its historical name – borserk (later name boyar, ardent hero). For a borserk, it didn’t matter which number of enemies bring down their swords. Usually he did not hold shield, and preferred to take the other hand with a weapon.

Like a wolf rushing at its prey, a borserk pounced on enemies, making them feel like a victim of an angry warrior. Dressed in skins, he introduced himself into a fierce state, causing himself wild roar, from which even the horses of the enemy ceased obey the riders. From a state of rage, a borserk sometimes could not go out and after the battle was over. Sometimes a bucket of cold water brought him out of shock. But sometimes he had to keep on the chain, because the slightest irritation caused an explosion fury, and he became dangerous for his fellow tribesmen.

Now it is necessary to descend to primordial times the origin of military cults. Probably those who constantly had weapons – hunters – and were the progenitors of professional warriors. When there was a need to protect yourself from annoying neighbors, weapons intended for hunting turned against aggressor. At this time, there is a weapon intended only for war: sword and shield. The sword was expensive and could afford to have it only a noble warrior.

The military education system was based on hunting cults. and incorporated the archaic of an already established culture. The basics of being, laid in paganism, were oriented according to the natural rhythm, they created a philosophical understanding of the spiritual world. Legend of the division of fire into three parts in the forge of the god Svarog lays the worldview system of the Slavic Tribozhii, based on three units of life.

The same principle Triglava is embedded in the structure of the notch battle. For in order to inflict any blow, it is necessary to create for this a certain amount of energy that is realized upon impact. it swing. The greater the mass and acceleration, the stronger the impact. FROM using a variety of mechanics of movement and the blow is realized. For ensure that it is energy-intensive when performing an element the inertia accumulated after the previous blow is used to form the base of the next. Beginning of formation or position hands in shock – this is Jav – one side of the Triglav. Rule is the impact of the blow, more precisely, the moment of its application is the middle of the Triglav. And finally – the inertial exit from the shock – Nav, the opposite Triglav side. She is come for the next blow. A circle locked up. Understanding the principle of decomposition of the impact allows build a diverse battle technique and adjust any hit.

Triglav also adjusts the behavioral norms of a warrior, which creates an experienced and even wise fighter, not a destruction machine. For in order to master the military equipment at a high level, it is necessary so that your actions in battle are led by a military spirit, driven by Triglav: I can – I must – I want. Where “I can” – a reflection of the level your technical background. “I want” – expresses the magnitude of desire in achieving the goal. And “Must” is the verge of the need for action. Share doubt – and victory will turn away from you. And the enemy is greedy will appropriate her.

These are, in a nutshell, the laws and beliefs to which, from time immemorial, times, the military life of our ancestors was based.