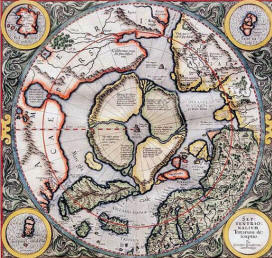 Hyperborea (Arctida) is devoted to a huge number of articles, and neither one of them is not without involvement as the most a convincing argument in favor of its existence the Gerhard map (or Gerard) Mercator of 1569 with the image of this mysterious continent. However, none of the many authors have tried analyze – what is shown on this map and is it possible the existence of such a geomorphological object in nature. Fig. 1. Map of Gerhard Mercator 1569 with image Hyperborea. On insets – enlarged images of estuaries Hyperborean rivers. 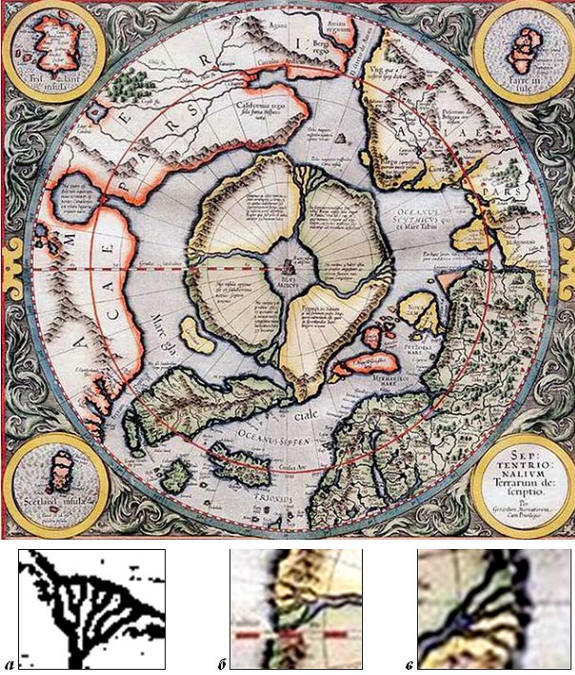 Photos from open sources According to the description of supporters Hyperborea existence, it is located in the North pole, was an archipelago of 4 huge islands, separated from each other by full-flowing rivers (which gave rise to consider it the mainland) Carefully consider the map of the Mercator. On the the outer side of the continent with a diameter of about 1200km is surrounded by mountain ridge, which exactly repeats its contours. In the center mainland, just at the north pole (!) is a mountain that many researchers identify with the legendary Mount Meru. Around it has an inland marine basin of a rhomboid-rounded form, the diameter of which is about 300 – 400 km. From this 4 rivers flow out of the inland sea at an angle of about 90 ° in relation to each other, oriented approximately in parts of the world – to North, East, South and West. These rivers before going to the ocean (“Mare glaciale “- the glacial sea) cut through the mountainous surroundings of the mainland and form distinct delta estuaries (inset a, b, c on fig. 1). Moreover, the most northern of them (Box a) is very reminiscent of Nile Delta and has the same triangular outlines. The presence of deltas indicates that the author of the map assumed more high hypsometric position of the internal reservoir compared to with the estuary parts of the rivers, which ensured the flow of river water into ocean. What should have alerted researchers, first geographers turn when studying this map? Can I take on faith her authenticity, if she depicts something that does not happen in natural objects of the earth? I think even high school students, not to mention geographic students faculties, could indicate a gross mistake made compilers of this map – G. Mercator himself or his the predecessor from whom he borrowed it: depicted on map 4 rivers flow from one internal basin, and such in nature does not happen! From ONE lake ONLY ONE flows river, and the inland sea connects to subsequent bodies of water ONLY ONE, usually narrow, strait. The reader can see for himself this, sorting through the memory of the lakes known to him and our inland seas the planet. In hot climates, the body of water may be closed (e.g. Aral, Caspian inland seas) and equilibrium between the inflow and outflow of water is due to the large evaporation from the surface of the reservoir. But more than one drain from the reservoir nature does not allow and this is one of its laws! Interestingly, in many sites on the Internet, in many encyclopedias and wikipedia that the author looked for searches confirmation of this pattern, not a word is said about it. The presence of a reservoir with 4 rivers on the Mercator map makes assume that this data is fictional and fantastic. They indicate that the map maker did not know about the existence of the marked regularity, as those who do not know it believes the reality of the mainland depicted. The presence of such fantastic element on the map nullifies all attempts interpret the cartographic image of Hyperborea Mercator as a scholarly source of information on the existence of this continent. There is another, clearly fantastic, element in the image of Arctida. It is a mountain range on the outer edge of the mainland, which is cut by four rivers. Analogs such a ridge in the relief of large islands, not to mention small continents (Australia, Antarctica) do not exist. The only thing at least somewhat reminiscent of such a hypsometric distribution hills and lows on the islands, these are atolls. But is it possible compare these miniature islands with a large mainland which is Hyperborea on a Mercator map ?! Yes, and corals, forming the outer shaft of the atolls, could not live in the conditions of “Mare glaciale “- they need warm water. No, there can’t be any analogies with Hyperborea Mercator! Another fantastic an element on the map is Mount Meru, which with precision set by the originator directly to the North Pole of the planet and orientates the position of the remaining relief elements associated with it Hyperborea relative to the pole – the inland sea and the outer contour of the mainland. Such an exact match can only speak of that it is artificial and created imagination and fantasy of the Great Cartographer. Against credibility Hyperborea Mercator is evidenced by its complete discrepancy buildings to modern relief elements on the map of the bottom of the North The arctic ocean. That some parts of this bottom (e.g. Lomonosov Ridge, the area of ​​the Novosibirsk Islands and Wrangel Island and the entire shelf zone) could in the historically recent time (5000-18000 years ago) to fall below its current level or were flooded with global sea level rise, is a very real scientific assumption. It means that in this area of ​​the ocean previously existed or an archipelago islands or a large land area, and hardly anyone can deny such an opportunity. Fig. 2. Comparison of the Mercator map with bathymetric map of the Arctic Ocean. Orientation images – along the Bering Strait in the north-north-eastern part kart. On the bathymetric map, the blue color corresponds to the shelf zones, two of which are connected by the Lomonosov Ridge (AB).

Photos from open sources But the modern bottom topography The Arctic Ocean was supposed to retain at least some elements sunken sushi, but this is not! The reader can see for himself comparing the two images in fig. 2. So, we come to an unambiguous conclusion: the image of Hyperborea is a product of fiction or Gerhard Mercator himself, or his predecessor, materials which was used by the Great Cartographer. We can only try to find out WHAT was the basis for this fiction? It is possible (this is only an assumption!) That such material appeared Plato’s data on Atlantis. Firstly, according to these data, the kingdom of Atlantis was located on an island with the same implausible relief as Hyperborea: its external part is so it was surrounded by a ring of mountains, and the inner one was a plain. Secondly, the Acropolis of Atlantes was crossed by 4 radial channels, located at an angle of 90 degrees to each other, like rivers on Mercator map. It is also possible that the image on the map of 4 rivers this is an echo of the biblical tradition of finding Eden in the area the intersection of the channels of the Tigris, Euphrates, Fison and Gihon. And if the last two rivers could not be identified for a long time on the ground, then the appearance of satellite images helped solve this problem and determine their position: their mouths were located in the confluence area Tiger and Euphrates. It is possible that biblical information prompted The author of the map of Hyperborea thought to depict exactly 4 rivers. However the fantastic details of her image look extremely naive and Are designed only for the most gullible users.