Kola Peninsula has long attracted the attention of researchers and travelers and tourists. According to legend, it is in these parts once there was the famous Hyperborea … 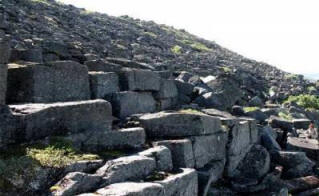 Photo from open sources In the early 1920s. went here scientific expedition led by a famous researcher and science fiction writer Alexander Barchenko. According to the hypothesis Barchenko, humanity was born in the North in the era of the so-called Golden Age, that is, about 10-12 thousand years ago. The Great Flood forced the Aryan tribes living there to leave the area the current Kola Peninsula and set off for the South. Barchenko was convinced that the Hyperboreans were enough highly developed civilization – they knew the secret of atomic energy, they knew how to build aircraft and control them … The researcher obtained information about this from the Masonic accessible to him literature. He also believed that the bearers of ancient knowledge of Hyperborea are Sami shamans living on Kola peninsula. Local residents said that at the foot of the mountain Ninchurt has manholes leading into the dungeon. But those trying to penetrate deep into, “grab a fool”. Members of the Barchenko squad found one of these manholes was even photographed at the entrance, but check the possibility of “stupefying” did not. Although they say that Barchenko himself, trying to penetrate a mysterious dungeon, experienced strange sensations … He concluded that this place is under the influence of unknown mystical forces … It was possible to build all sorts of assumptions – about underground tunnels, about soil movements, about the traces of Hyperborea existing here … Geologists discovered rare earth and uranium ores in these places. And in 1922 they found in the taiga near the famous Seydozer, at the intersection water flows, hills resembling pyramids! Sami used these structures for ritual purposes, said that they were built a very long time ago, in immemorial times … According to the scientist, all this could serve as evidence of the legendary Hyperborea. Shamanistic seids (high columns, stacked of stones). Those present near these structures noticed weakness, dizziness, and some experienced hallucinations, they recorded a decrease or increase in weight body. Here the so-called marking was observed, in which people repeated each other’s movements, spoke strange languages, prophesied … Did any forces of this unique occult influence places on the psyche of people? After all, shamans were able to turn simple mortals in obedient puppets … In 1998, the Kola Peninsula visited the next expedition. Its structure included geologists, historians, archaeologists, ethnographers, philosophers and even ufologists. Search the detachment was called Hyperborea-98. On one of the slopes of Ninchurt archaeologist Alexander Prokhorov discovered a poorly preserved, but powerful masonry walls. On the isthmus between Lovozero and Seydozer in one of the most inaccessible places stumbled upon a very ancient seyd. At the top of this large stone is a very regular geometric a peculiar cavity was placed in the form, and in it at the very bottom there were coals. Are these traces of a ritual associated with fire? But, perhaps, one of the most exciting local finds is the remains the oldest observatory, structures in the form of a 15-meter gutter with two viziers. By structure, design and possible functions the construction resembled a large sextant recessed into the ground – a device the famous Ulugbek observatory near Samarkand … expedition professor V.N. Demin subsequently writes in his book: “All these facts confirm the concept of a number of Russian and foreign scientists about the northern origin of all world civilization and what ethnic groups in the distant past – several tens of thousands of years ago – came from the North, and natural forced them to this migration catastrophe. And our Kola Peninsula is one of the centers Hyperborean culture. “Yuri Suprunenko