We are almost ready to reject the assumption of real the geographic existence of Shambhala, agreeing that it is, first of all, the “chamber of wisdom within us.” Some special type perception of mystical knowledge, for ease of perception beyond our consciousness and “placed” somewhere in the lost mountains. It’s always hard for a person to believe that the greatest secrets, the most grandiose revelations and amazing esoteric knowledge is inside us in some unrealized “folded” form.

Therefore, it is much simpler and more convenient for our psyche. exteriorize the center of this wisdom, i.e. take it beyond self, creating somewhere outside the “land of the wise.” Such assumption on the mechanism of the emergence of the legend of Shambhala seems quite possible. But at the very beginning of our we warned that cultural paradoxes can sometimes make us doubt the most brilliant hypotheses. therefore make a reservation that there is strong evidence that Shambhala yet it really exists, or at least existed precisely in the form in which legends say it – in the form of tantric state or habitation of some “wise people.”

This time the “contender for Shambhala” is the Chinese mountain Kunlun. According to ancient descriptions, Kunlun Mountain is largely surprisingly reminds us of Shambhala. 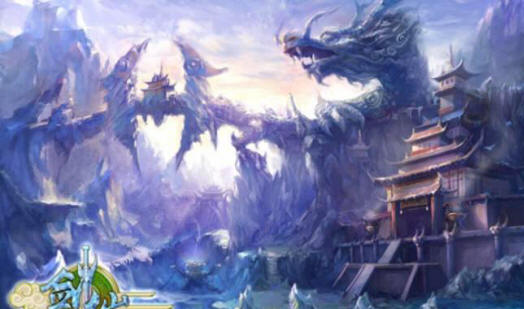 According to the ancient “Canon of the Mountains and the Seas” (“Shan-hai jing”) – catalog of mysterious descriptions of certain places – Kunlun Mountain located somewhere in the northwest, where it really lies Kunlun ridge, stretching west of the Central Plain China, it is adjacent to Tibet and is a chain of gentle mountains. Another name for Kunlun, found in ancient texts, is Tiantan (“Heavenly Hall”) – to this remarkable name we are still will come back later.

It is also important that in the legends the real Kunlun mountain range mixes up with certain Kunlun chamber – either a country, or the mountain. In any case, this is the place of the abode of ancestors and immortals xianya. According to legend, the supreme spirit dwells on top of Kunlun Tai di. The mountain rises to 500 li (approx. 250 km) and, as emphasized “Canon of the mountains and the seas,” namely, “here is the center of the earth.”

Let’s pay attention to how one of the of the oldest treatise-schemes “Shanghai Jing” (“Canon of the mountains and the seas”): “In within the seas, in the northeast, is Mount Kunlun. it earthly capital of ancestors. Kunlun Mountain is surrounded by eight hundred or so she rises for ten thousand wives …

Many gods live here. On eight edges are sheer rocks, they are surrounded by the river Red. Not so perfect as a Hunter (a skilled hero of Chinese myths, who struck in the sky several suns – A.M.), cannot climb a steep the rock. ”

Before us is an important feature – only Kunlun can get skilled, special person. Just like in Shambhala.

Another feature that immediately catches your eye – and Shambhala and Kunlun are surrounded by mountains on eight sides (on the other versions – eight mountains), which surrounds the river. Mount Kunlun Chinese tradition attributes many amazing things. Before of all, the founder of the entire Chinese nation lives here, one of the legendary first rulers of Huang Di – “The Yellow Ruler.” 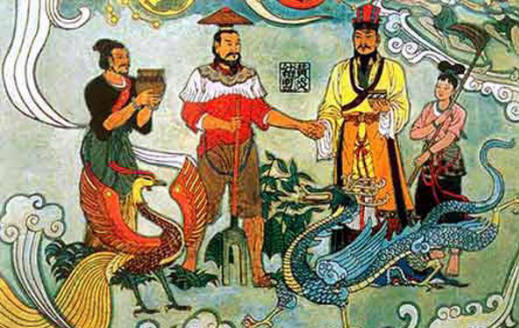 It was from him that the entire Chinese clan went, it was he who taught people many tricks, and followers of one of the greatest currents mystical thought – Taoism – consider it one of the founders of their school.

Lives on this mountain a certain animal Caiming – “Emitting light “, which guards nine wells, fenced with jade, and nine gates. It looks like a huge tiger with nine heads and human faces. Caiming stands on top of Kunlun, turning around east. Along the way, we mention that in the territory of Shambhala, too, legends say there were nine deepest wells leading to the center land, and guarded by their formidable Buddhist spirit with a bunch of lightning (vajra) in the hand.

But for our presentation, the most important is another thing – the mountain Kunlun was famous primarily for the fact that there lived those who reached immortality. Their good energy was thought to be beneficial influenced the whole Celestial Empire, and although the people did not know about them, nevertheless, for thousands of years they have fulfilled their role, bringing peace and peace.

To achieve immortality, it was first necessary to melt a pill of immortality from several hundred precisely selected secret ingredients, such as silver, amalgam (alloys of mercury), copper, mercury, arsenic, heavy metals, crushed minerals! Herbs were used in small quantities, since they were considered a very weak means, and one of the magicians, stepping into immortality, Tae Hong (3rd – 4th centuries) somehow pathetically exclaimed: “They are not even able to preserve themselves, wither and wither. How can they save the longevity of another! ”

All these components have been rafted for years in a special crucible in a secluded place, usually in the mountains. It should practice long meditation sessions, engage in special gymnastic and breathing exercises in order to fully purify and pacify your consciousness, come to a state of complete “self-forgetfulness”, joyful detachment and “non-action” when a person becomes able to follow the absolute law and the path of all things “path-tao.”

The main habitat of the wise immortal and greatest magicians the same Kunlun Mountain was considered, and these amazing people were settled on its slopes according to their status, which determined by their magical abilities and wisdom. Here flocked to those who comprehended the secret wisdom of life, joined cosmic life of Tao, and so gradually on the slopes of Kunlun allegedly formed a country of sages and immortal celestials. From here they could freely go to Heaven, and along the mountain, as if by stairs, to go down into the world of people. Kunlun, like Shambhala, it was considered the center of the earth, it was not by chance that it was called the capital of the heavenly ancestor. ”

All those whom the Chinese tradition believes are inhabited here great sages and progenitors of people.

Moreover, it is here that the oldest ancestral home of all the Chinese! So, according to one legend, the ancestors of all people of Nyuva and Fuxi, brother and sister, lived on the mountain peak of Kunlun, others there were no people in the world at that time.

Here, on the Kunlun Mountain, there live those whom the Chinese tradition calls xiang. Usually in modern literature the word xian translated as “immortal” or “immortal celestials. Indeed, it is precisely this meaning that the concept of xian acquired in folklore. But initially, the xiang were not at all transcendental creatures, but very specific shamans, magicians and mediums. And they really had the wonderful gift of joining communication with the souls of departed ancestors.

Entering into a trance under the influence of psychotropic drugs, various broths, magic dances and rhythmic beats in gongs, they as if they were making a trip to the other world – the world of the dead, the world soul of the ancestors. These souls lived somewhere high on the mountain, where sent xian, not by chance even a hieroglyph meaning xian, portrayed from two elements – “man” and “mountain”.

Xian as a shaman was able to open his higher consciousness forces, and sometimes, like a medium, even “let” them into yourself. Exactly he embodied a personal connection between the world of people and the world of spirits, the world of the living and the kingdom of the dead. For many eras the name of this character, his social role and functions, but the sacred meaning remained the same.

The very lifestyle and behavior of xiang can be correlated with the early dancing shamans. According to some versions, the idea of ​​xian came with immigrants from the West, from some sacred “western lands”, and in that period it meant smoke from the body that soared to the sacred Kunlun mountains during the ritual burning of the deceased. So way, xian was literally “spirit”, disembodied human representative.

Finding the state of xian, commonly understood as “immortal”, most often in early traditions associated with a journey to the mountain Kunlun, on the spurs of which lived all the famous heroes of the Chinese stories of immortality, including Fuxi, Huang Di, Lao Tzu and a lot others. The Kunlun Halls became an ideal point of aspiration aesthetes and intellectuals of the Tan-Sung period (V-XIII centuries). Medieval poets dreamed of “having fun in peach trees on the slopes of Kunlun, “” inhale the fragrant scents of gardens and admire flowering plums on the spurs of Kunlun. ”

Many wonderful properties were attributed to the Xian, including teaching people secret knowledge, transferring a certain tradition that able to bring harmony to the world. It is possible that the concept of xian was brought to China from somewhere in the West and originally denoted the spirit of a person who continues to reside in the dead body and during cremation soars up, reaching the tops of Kunlun. Gradually, in the folk tradition, the xiani turned into some heavenly creatures.

Interestingly, in order to climb Kunlun Mountain and become a Xiang, almost the same conditions are required as for entry in Shambhala – to undergo a complete physical and spiritual purification, free the mind from all thoughts of yourself and only desire through own perfection to bring good to people.

Moreover, with each step of climbing Kunlun, a person gains ever more marvelous properties and eventually turns into immortal deity. There is no return from here – a person either becomes celestial, or perishes.

Similarly, there was no return to those who set off in search of Shambhala.