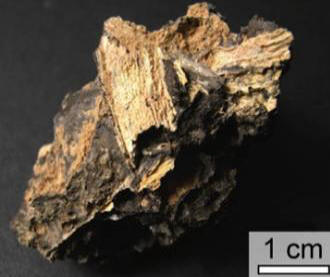 Scientists exploring large areas of impactites (special class rock formed as a result of shock and explosive rock formation), suggested that what happened on Earth, could happen on Mars millions of years ago – that is, Martian impactites may contain traces of organic components. Collisions with asteroids and comets can be a real environmental disaster, destroying animals and plants locally and even globally. However new research Brown University says such clashes they can “preserve” traces of life at the time of the collision. A team of scientists led by geologist Pete Schultz, detected traces of leaves and organic components in samples rocks discovered in Argentina, south of Buenos Aires, where the soil rich in impactite, formed as a result of several (like a minimum of seven) ancient clashes that occurred during the period time from 6 thousand to 9 million years ago. One of these samples was formed about 3 million years ago, – about the same the time when 35 species of animals disappeared (scientists refer here to article published a few years ago in the journal Science). The work of scientists is published in the latest issue of the journal Geology. Schulz and his colleagues found leaf fragments, including structures that are very reminiscent of pampas grass, which and Now grows in this region of Argentina. Chemical analysis samples also revealed the presence of organic hydrocarbons. To understand how these structures could be preserved and components, Schultz and his colleagues tried to reproduce in laboratory conservation process. They mixed powdered impactite with fragments of leaves of pampas grass and heated this mixture to different temperatures over different periods of time. Experiments showed that plant matter survived when samples were quickly heated to a temperature of about 1,500 degrees Celsius. According to Schultz, if an impactitis can store traces of life on itself Earth, he can do the same on Mars. And soil conditions in Argentina, which contributed to the conservation of samples, in in principle, similar to the soils of Mars. “Impactit may be just that a place where traces of a life that existed four billion years ago. Perhaps on Mars we will not find them in the form of plants, however, we can detect traces of organic constituents, “- Schultz says.