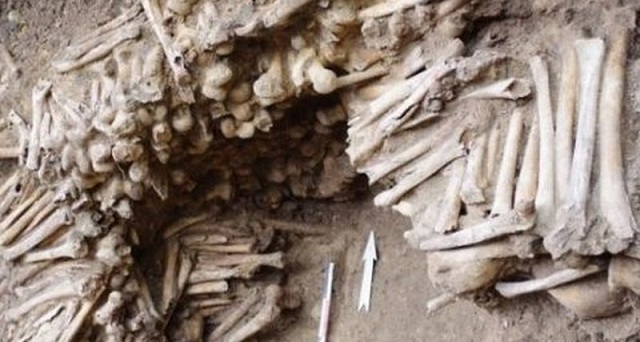 Archaeologists working on the excavations of St. Bavon’s Cathedral Ghent, Belgium, accidentally made a gloomy discovery.

During the excavation of the foundation for the new church extension the workers discovered something truly sinister. Archaeologists Arriving at excavation site, identified a real wall made of human bones. These were mainly the bones of the thighs and lower legs of adults, mixed with fragments of fragmented skulls.

The remains date from around the 15th century. Probably their tight stacked and packed so that as many bones as possible fit in a limited space. However, the scientists themselves recognize that they have no idea why it was necessary to erect a semblance of a wall of human bones. Lead researcher, Janek de Gris, said that usually in the bones of the funeral pits lie abundantly, but more or less free. In the case of the Cathedral of St. Bravo, the remains are specially were laid so as to create a single, dense structure.

Small bones, such as ribs and fingers, were never found. It is worth noting that in the XV century for children’s burials, especially massive, courted very poorly. When did you have to move bodies crumbling to dust, grave diggers usually just took the most large bones, not paying attention to small fragments. In those times people believed in the literal resurrection of the body, and therefore the relics were considered sacred and burial practices flourished as never before. It is no accident that the remains of approximately six million people!