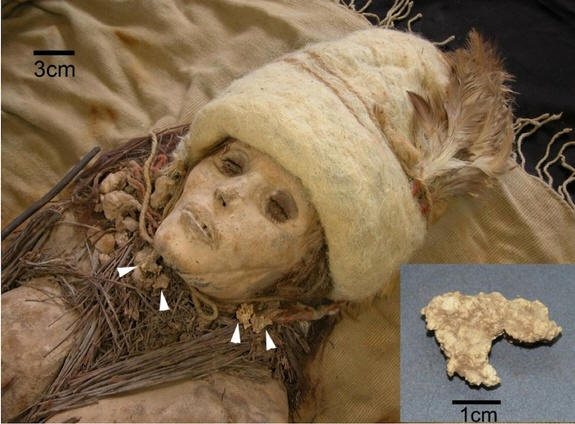 Yellow slices of the oldest cheese in the world were discovered on bodies of mummies buried in the Chinese desert of Takla Makan. The age of these mummies is about 3800 years. Apparently their buried with pieces of cheese so that the dead in the afterlife were able to enjoy this delicious snack. According to research, this cheese was very nutritious and easy enough to digest body food. Archaeologists have discovered hints of cheese production as early as 6 thousand BC, however, until now, samples of the most scientists did not have ancient cheese. Most evidence for the appearance of cheese products was based on residual fats found in clay shards, so their analysis was substantially limited. The researchers found the oldest cheese in excavation time of the ancient Xiaohe cemetery, also known as necropolis of Ordek. Ancient necropolis was first discovered in a sandy a dune located in a dried riverbed in 1934. On this hundreds of mummies buried in large wooden coffins. These coffins resembled inverted boats that then they were covered with cowhide, which created a kind of vacuum. The combination of dry air and salty soil allowed the mummies perfectly save. In addition, the remains of yellow cheese are well preserved, decorating the necks and chests of the dead. Chemical analysis cheese showed that the ancient dairy product did not include rennet enzyme. It is found in the guts of ruminants and is used to making hard cheese, such as, for example, cheddar. The production technology of ancient cheese was based on fermentation, caused by yeast bacteria. Today, these bacteria are widely used to make such a popular and useful drink like kefir. In addition, as part of ancient cheese, scientists found a much lower salt content than cheeses that can be stored for a long time. That is, the cheese found was not designed for long storage, and therefore for trading with remote territories.