A group of Kuzbass scientists in the vicinity of the village of Malaya Salairka in Guryevsky district discovered an ancient abandoned mine. Archaeologists sure that these mines appeared on the territory of Kuzbass back in pre-Russian times. Interview with a doctor of historical sciences Vladimir Bobrov.

– Vladimir Vasilievich, there is a legend about the Chud people who lived in the same place where archaeologists found the mines, that’s just these people lived exclusively underground and smelted copper. Of course, scientists do not trust legends, but still how much true ancient legends? There may be mines that are found in Guryevkoy area, be the “miracle mines”?

– “Chud” is a conditional name for the pre-Slavic people. They were “strangers” or “wonderful.” These people are from the first half of the third millennia BC to the XI-XII centuries of our era engaged mining ore. Subsequently their ancient mines and mines really got the name “miracle mines”.

Scientists have discovered ancient copper mines in the Guryev district in the 1780s. Those researchers called the local mines “miraculous.” We tried several times to find mines from old data, but the experience of 2009 and 2012 was unsuccessful. The fact is that the coordinates in the documents approximate, and distances in versts are indicated. In october group led by Anna Savelyeva, Leading Laboratory Engineer Archeology Institute of Human Ecology Siberian Branch Of the Russian Academy of Sciences, finally found near the village of Malaya Salairka cave and several hollows – small hollows that remained after ore mining. 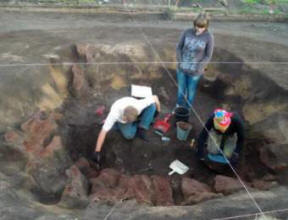 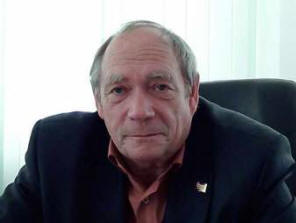 They also found a piece of copper ore with traces of malachite and azurite. Minerals were given to the specialist for study, so that he installed them age and origin. And archaeologists will return to Malaya Salairka, to continue research.

Unfortunately, people did not live permanently at the mine, i.e. there will be no burial places, no dwellings, or some household items. It remains to hope for random finds – for example, those left stone hammers or lost things. In any case, if the study of the “miracle mines” will be successful, we will get the first in Kuzbass mining monument.

– Archaeologists in the Guryev district worked in the fall. But after all in the summer did not mess around. One group went to the village of Bolshoi Pichugino, and the other – to the excavation in the Yashkinsky district. Did you succeed archaeologists make scientific discoveries?

– The candidate of historical sciences Pavel German unearthed Bolshepichuginsky mounds in the Tisulsky district. The most amazing, that in the burial grounds of the Early Iron Age his group found vessels, dating back to the Early Bronze Age. That is, there is an ornament on the pots, characteristic of the tribes of that time. It’s just not yet clear where Tagarians took these ancient, even by their standards, jugs and why decided to put in the grave of their dead? Maybe already at that time people did not disdain to stir up the old mound yes to profit found?

Group led by Alexei Marochkin, Researcher Institute of Human Ecology, explored an ancient settlement near from the village of Ivanovka-1. Here they found the first in the Kuzbass Pritomie funeral complex of Kulay culture. It is amazing and small. studied culture of the early Iron Age. Known that the ancients people knew how to make tools from bronze and create cult artifacts – figures of people, animals and birds. Alexey managed to find characteristic ceramic vessel and stone laying of a round form. Just what it is and what it was intended for, we have not yet said we can.

– In general, often ancient peoples ask archeologists complex puzzles? Well, they say, we knew how to use this contraption, and you, once you unearthed it, sit now and think what kind of Lemurians and the Atlanteans taught us how to use it. Or such cases are big rarity, and usually everything is extremely simple and clear, and no no mysticism?

– Each expedition brings to the institute a collection of new things and materials. They may already be known – for example, dishes with specific ornament or arrowheads. What are you for? these items are clear to everyone. Such finds, similar to or identical, already were, already met. But anyway, any ancient a thing is a source that contains certain information. All finds are carefully studied and researched.

But also mysterious objects, the purpose of which cannot be said unequivocally, archaeologists find quite often. Just such things cause genuine interest not only among scientists, but also among simple the inhabitants. For example, ceramic balls and discs, which belonged to the culture of the Late Bronze Age. Neither for jewelry, nor for they don’t look like guns … Why were they needed, we still couldn’t yet to determine.

– Vladimir Vasilievich, well, archaeologists found the balls, were delighted as children, and for what purpose they are still incomprehensible. Versions at all no?

– Unfortunately, there are no versions. We are at the threshold of only research ancient monument. In appearance – ordinary burnt clay balls with a diameter of 7 to 10 cm, lay in a pit. There could have been a settlement center of bronze foundry or sacred place. For to understand the purpose of the balls, you need to unearth this whole object. So far, even for us it is a big mystery.

I want to say that the archaeologist works as a forensic expert. is he also studies the remnants of the tracks, builds different versions to understand and establish who the criminal or victim is. Only we start a criminal case and no one needs to be punished. We are just exploring historical phenomena, we are looking for who left traces. Very interesting identify the origins of the people, trace its historical fate, learn about lifestyle, down to what diseases our ancestors hurt who they hunted and what they ate.

– What archaeologists find can be seen somewhere or unique artifacts and those that have no name are stored only in Institute laboratories?

– We do not hide or hide anything from prying eyes, because many things are unusual and interesting. For example, “ironing” – ceramic objects from the Stone Age, the purpose of which scientists not yet known, are in the museum of archeology and ethnography Kemerovo State University. They called them “irons,” because there is a hypothesis: with their help, ancient people smoothed reed poles for arrows.

In the Kemerovo Regional Museum of Local Lore, an Ancient funeral mask of the Tesinsky period of the Tagar culture, which in 1968 found professor Anatoly Martynov.

– What are the most important questions you, as a scientist, want to find the answers?

– Firstly, to find out why the ancients needed mysterious ceramic balls. Secondly, find the settlement or burial of the most the first peoples who settled in Kuzbass. And thirdly, understand who left the drawings on the rocks of Tomsk pisanitsa. Of questions a lot, which means we have something to work on.