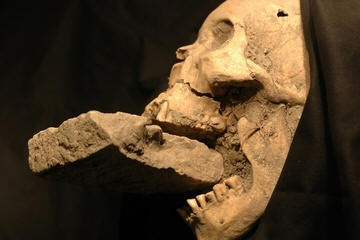 Polish archaeologists made an amazing discovery – they discovered a whole group of vampire graves. These graves were found in Road construction time near the Polish town of Gliwice. Having discovered the remains, archaeologists were at first sure that it mass grave of soldiers.

However, the severed heads of the dead, placed at their feet, testified that this burial was purely ritual character whose purpose was to buried the dead did not come to life. In addition, in the mouth of one of the skeletons was huge brick. According to ancient legends and superstitions, after separation of the head from the body of the “undead” can not rise from the grave and harm the living. Decapitation was one of the easiest ways to deal with vampires. Other methods were less aesthetic. For example, a person suspected of vampirism was hung on a gallows and didn’t remove the corpse until the decomposed body was naturally image was not separated from the head. There were others, no less extravagant ways to deal with vampires. In one study, which was published by forensic anthropologist Mateo Borini, it was said: at the end of the 16th century in Venice during the outbreak of the plague a certain woman died who was buried after death by inserting her into mouth brick. As it turned out, putting bricks into the mouth of the dead – quite a popular way of the time to fight vampires. It was believed that a tightly inserted brick would not allow revived “creatures” feed on the blood of living people. In general, in the Middle Ages any disasters, mass diseases and crop failures were attributed to machinations evil spirits. And in order to fight this evil, they found “scapegoats,” who were accused of either witchcraft or vampirism. Sometimes, as you know, in the bodies of suspected vampires driven in wooden or iron wedges. For example, in Bulgaria in 2012, archaeologists discovered two well-preserved a skeleton with hammered iron rods in the chest – most likely during life or after death, these people were accused of vampirism. The practice of decapitating the corpses of people suspected of vampirism before the burial was widespread among Slavic peoples, especially at the dawn of Christianity. Scientists are sure that faith people in vampires is based on fear and superstition, as well as lack of basic knowledge about the processes of decomposition of the body. For example, if a corpse is buried in winter, body decomposition will be much slower and intestinal bloating can trigger blood to flow through the mouth. And if this corpse dig out after some time, it will look very reminiscent of vampire – hence the legends, tales and fears.