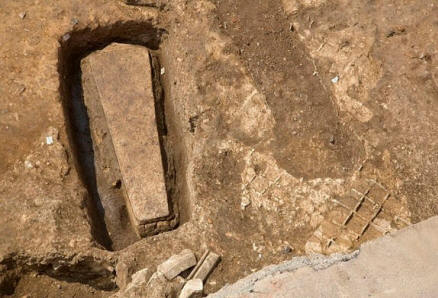 In the ruins of the monastery where the English king was buried Richard III, archaeologists discovered an untouched stone coffin. Researchers intend to lift the coffin lid and try to figure out whose remains are there. Experts are sure that in the found the coffin is the skeleton of a medieval knight or one of the monks very high status since he was buried in the monastery. Richard III – the last king of the York dynasty, who ruled England from 1483 to 1485 and was killed in battle during the English civil “war of the Roses.” Some scientists believe that it is his the remains were buried in this so-called Gray Monastery, which during the Protestant Reformation in the 16th century was destroyed, and little is known about it from history. However research showed that a stone coffin was buried in the ground 100 years before Richard’s death. In the near future, researchers plan to open the coffin and finally find out who is actually buried in it. Some experts think that it may contain the remains of a knight Sir William, who died between 1356 and 1362, or one of two The heads of this monastery are Peter Swinsfield or William Nottingham. “This is the first stone coffin that we found completely safe for the time of all our excavations of this in this place, “said the director University of Leicester Matthew Morris. “I am very glad that he survived no visible changes! “. Before the lid of the mysterious coffin will be open, scientists plan to measure and photograph it, moreover, they will do this, apparently, without the presence of media representatives.