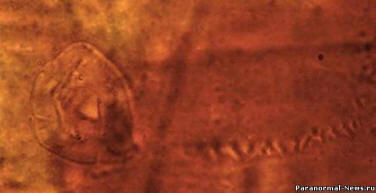 Once upon a time, about 200 million years ago, an ancient leech made a viscous and sticky cocoon, which accidentally came across strange drop-shaped creature with a springy tail, where it and It was stored until recently, scientists discovered it. Himself the cocoon is similar to those built by ordinary, modern leeches. A inside there was a creature resembling round-eyed ciliates Vorticella. His body resembles a bell-shaped one about 25 microns (this is about the width of a human hair). To him about twice tightly folded into a stalk connected longer. With this stalk, the animal, apparently, was once attached to hard surfaces, and his leg is constantly reduced, then straightening up like a telephone cord, then curling into a tight spring. This animal lived in the late Triassic period, when there were much warmer and moist tropical forests grew around. At that Antarctica was still part of the Gondwana supercontinent. It is amazing how a soft-bodied creature could have survived so well. Scientists suggest that mucus secreted by a leech during building a cocoon instantly “buried” an unknown creature immediately after the cocoon fell under water or lay in wet fallen leaves. Our mysterious animal attached to it with its long the stalk, quickly contracting, was trapped in a sticky substance and finally completely plunged into the shell, which hardening is required from several hours to several days. The only comparable find is a cocoon, with enclosed inside a nematode, about 125 million years old, was discovered in Svalbard (Norway).