In the center of Krasnoyarsk there is Mount Kum-Tigey (Karaulnaya), on the top of which rises the church of the Martyr Paraskovia, and at the foot of the was once the prison of the Red Yar.

Famous explorer of Siberia Semyon Remezov, in the 17th century having studied the surroundings of the prison, he suggested that many hills and mountains spread around the settlement may well have man-made origin. 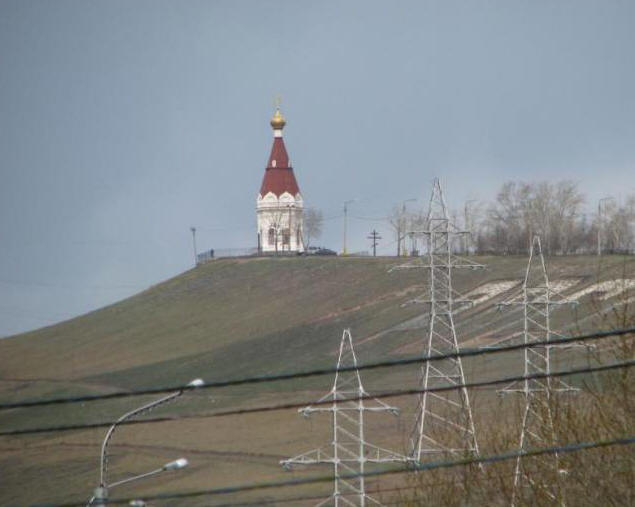 A century later, Friedrich von Stralenberg, who traveled to Siberia, made a discovery: a series of hills surrounding Krasniy Yar consist of giant stones with traces of thorough machining. He later received a manuscript from a Muslim priest in Tobolsk from Bukhara. It spoke of the ancient state of Tataria, which occupied territory of Western and Eastern Siberia. The text mentioned among other things, about the majestic stone pyramids in which on Over the years, the rulers of Tataria were buried. 30 thousand years ago ancient people lived on the territory of the Krasnoyarsk Territory. At the beginning of our the ancestors of the keto-speaking peoples settled here, but they disappeared by the beginning of the XVIII century. They were replaced by Turkic tribes. Before by the arrival of Russians, the ancestors of modern Kyrgyz lived here. Them the settlement was called “Kyzyl-yar-Tura”, that is, “the city of red coast “. 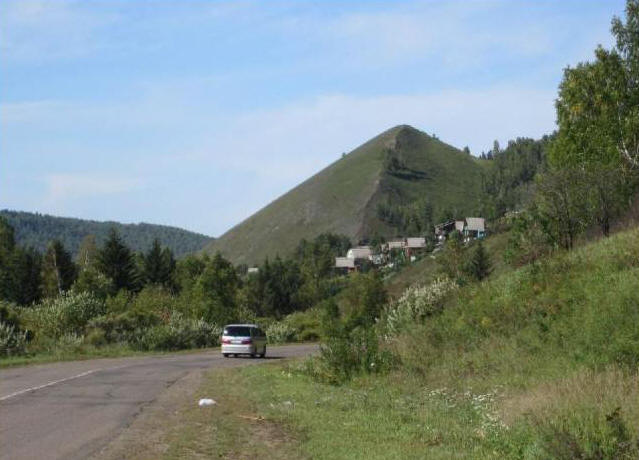 In 1608, the Cossacks from the Ket fortress went up the Yenisei, with the intention of finding “new zemlyatsev” for the tsar of Moscow. Swimming in the river, the Cossacks noticed the land of Prince Tulka and decided to settle there. Local Turks did everything so that the Russians left their land and committed continuous raids. And then the Cossacks decided to build a prison defense against these attacks. In 1628, on Mount Kum Tigey was a guard cone-shaped tower was built. After that at the foot the jail Krasny Yar began to line up. In 1690 the prison was city ​​status. For many years, the Sentinel Mountain (Kum-Tigey) was for Krasnoyarsk tourist attraction with a symbolic meaning. Already in 1667 at this place put an end to commemorate the victory Cossacks over the warlike Yenisei Kirghiz, and in 1805 the cross was replaced by the famous chapel. Russians became known to her thanks to the picture on the banknote. True, in the image the turrets are difficult to understand exactly where it is located. Summer 1927 year expedition led by archaeologist S.A. Teploukhovy discovered on Karaulnaya Hill there is a rich burial of the 13th century. In the burial ground there was many expensive items. Apparently, a man was resting here princely family. Thus, the Bukhara manuscript found its the confirmation. In 2005, the newspaper “Evening Krasnoyarsk” appeared sensational article of the Krasnoyarsk alternative scientist and amateur archaeologist Pavel Poluyan. He wrote that Sentinel Mountain has an artificial origin and is a pyramid created in ancient times by the mysterious Siberian people. “I stand leaning hand on a huge stone block. He’s almost my height and although its edges have crumbled and broken off, the block has the shape of almost the right cube. The stone is not cold, heated by the sun, but to the touch reminds ordinary concrete slab. “Indeed, megalithic masonry in the form of huge gray blocks can be seen unarmed eye, if you turn towards the Red Yar. Rows of these blocks go almost parallel. The archaeologist wrote that familiar geologists, with which he asked a question, pointing to the rows of stone blocks, answered without hesitation that such rock outcrops have no nothing to do with artificial masonry but are open the edges of the stone body of the mountain. The scientist believes that the skeptic attitude to his idea is due to the fact that the “hypothesis of artificial the nature of the hill seems absolutely fantastic. ” 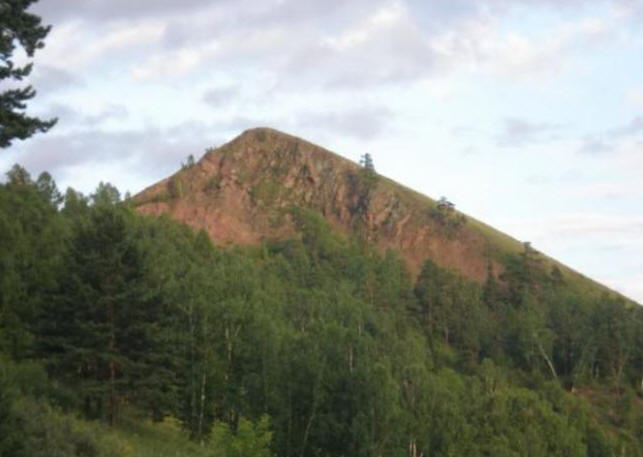 However, this assumption becomes more plausible if remember the story of the pyramids in China. The fact is that close the large city of Xi’an, in the center of agricultural fields, Ancient pyramids were discovered. There were several of these pyramids. tens, and one of them reached a height of 60 meters, that is, only in two times smaller than the largest pyramid of Cheops in Egypt. Long time European science did not even suspect the existence of these pyramids, and only in 1997, an amateur archaeologist Hartwig Hausdorff managed to get the consent of the authorities to investigate the mysterious buildings. The pyramids turned out to be made of clay bricks, but their for a long time they could not recognize for the pyramids, since their slopes were overgrown trees and it seemed like ordinary hills. Were here later found the remains of walls and murals. According to researchers, the pyramids were the tombs of the ancient Chinese emperors of two or three thousand years ago. But only to excavate the power of the PRC �banned, stating that the study of mysterious buildings – the business of future generations. This instructive story made enthusiastic archaeologist Pavel Poluyan to continue research, not believing skeptics. Led by a small expedition, with a digital camera and with a hammer he climbed the slope of the Krasnoyarsk pyramid. Researchers concluded that rock outcrops are indeed similar to the remains of ancient walls, since vertical cracks come from amazing frequency, dividing the monolith rocks into the correct blocks. Thin layers of black matter also attracted attention, similar to the remnants of resin covering the surface of blocks in some places, fastening the masonry. Samples of this substance were taken for analysis as and samples of putative concrete. Researchers put forward another the hypothesis that the huge hill has a natural origin, and here is its top – an artificial pyramid. Indeed, exaltation on top is flat and pyramidal. If this is not an ancient burial, it can be assumed that in ancient times on the mountain were located defensive fortifications of some Siberian civilizations. It could to be constructions of the Tagarians who lived here 2,500 years ago, could be and the strengthening of the ancient Kyrgyz. Exquisite medieval decoration beauties are still kept in the funds of the museum of local lore, and yet they were found on the slopes of the hill. There is another seemingly absolutely incredible version that before the Great Flood the climate was softer and warmer, and all living things, including humans, were more tall. These ancient giants built megalithic facilities throughout the world, including in Krasnoyarsk. Is in the outskirts of Krasnoyarsk is another mountain – Belaya overgrown with forest, which has long been called a pyramid. Stay close with it “cleans” the karma of a person and even relieves him of many ailments. 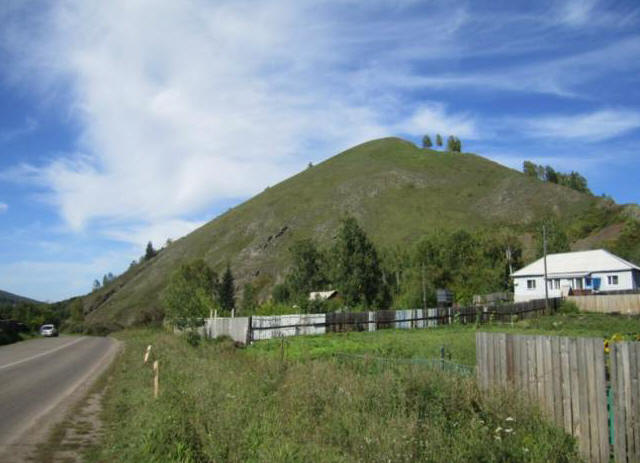 Sopka Chernaya (Kara-Dag) – the highest “pyramid” in the vicinity Krasnoyarsk. This is a long extinct volcano. In the early 90s a group of archaeologists studied the sites of primitive man, and came to the conclusion that a mountain trihedron with a destroyed western slope consists of stones folded artificially. Also in the area mountains there was an increase in background radiation, but the reason for this phenomenon is still a mystery. Also from space were Pictures of the area were taken, which confirmed the opinion of archaeologists: Kara-Dag is of man-made origin. Apparently representatives ancient civilizations, having chosen a dying volcano, used it in as the basis for the construction of the pyramid. But millennia have hidden from the descendants of their labors. Volcanoes Stones China Pyramids Siberia