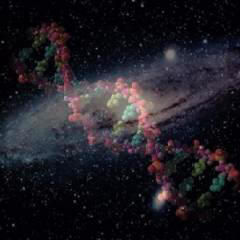 Original calculations based on Moore’s law show that DNA appeared 10 billion years ago, that is, life is 2 times older of our planet. Genetics from Richard Gordon from Gulf Specimen Marine Laboratory and Alexey Sharov from National Institute on Aging used Moore’s law to determine the age of DNA. This a thought experiment is not a rigorous scientific study, however, it led to an unexpected and puzzling result, which will undoubtedly lead to a lot of discussion. Moore’s Law regarding electronics and states that every two years happens doubling the number of transistors in microcircuits. Genetics decided apply this law to biological circuits, in particular DNA, which is also complicated in the process of evolution. Scientists have calculated which unlike electronics, genetic complexity doubles every 376 million years. Thus, by simple calculations it turns out that the first life should have appeared almost 10 billions of years ago – long before the advent of the Earth itself. Recall that the Earth formed only 4.5 billion years ago, which means if Moore’s law applies to biological systems, the forerunner earthly life arose somewhere else in the universe and came to our planet is relatively recent. In principle, this does not contradict modern knowledge in the field of biology and astronomy: transfer the basic substances that make up DNA, various cosmic bodies already proven, and star systems began to form in less than billion years after the Big Bang. If Moore’s Law Applies to biological systems, it turns out that the ancestress of the earth life arose immediately after the formation of the first planets – about 3-4 billion years after the Big Bang. Of course, the unexpected result of the calculations of Gordon and Sharov can be explained and other reasons, such as uneven development of life forms, and also the periodic death of more advanced forms. Also have the likelihood that life began to comply with the principles of law Mura, only having reached a certain level of development. Of course the thought experiment of two scientists is not strictly scientific experiment, however, it raises important issues in the development of life, which are especially relevant today. Once humanity learned to find planets from other stars, the question of origin life and existence of brothers in mind went into practical directional search plane.