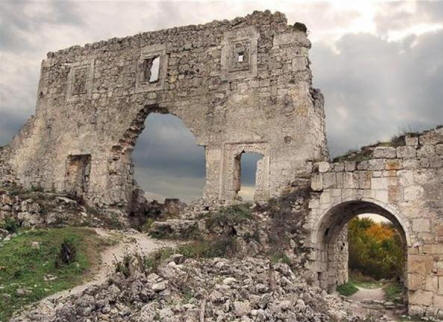 A photo from open sources According to a 19th-century traveler, who visited Mangup, you must run “away from here, because there is nothing worse than unsatisfied curiosity. “And yet two centuries later, we ventured to experience something similar. Medieval cave city Mangup-kale, in the vicinity of the Crimean Bakhchisarai, certainly has an ancient history. Of course, in temporary estimates past reliable sources written. Less objective estimates of archaeologists, since the criteria for dating ceramics with change over time. Head of the Department of the History of the Ancient World and Middle Ages Taurida National University. Vernadsky Alexander Herzen, who put a lot of effort into the study of history Mangupa, believes that people began to visit the famous plateau back in the era of the copper-bronze age, that is, 5 thousand years ago. But noticeable the population on Mangup appeared only in 200-300 years of our era and increased significantly in the years 500-600. So it turns out that Mangup-kale more ancient than Russia … The history of the ancient cave city, located at an altitude of 584.5 meters above sea level (available geodetic sign) appears to be a “swing” when behind the rise followed by descent, then again rise, decline and rise again, that, in in general, and not surprisingly. Already in 1576 a certain traveler Bronevsky left for posterity evidence that Mangup is a miserable sight, “everything else is terrible ruin. “From the” non-essential “witness noted in the cave city churches of the Virgin and the Great Basilica, Greek priest yes several Jews and Turks. But what about history Mangupa definitely? Probably those who inhabited Mangup, starting with 300s, had economic and trade ties with Chersonesos, since Emperor Justinian (517-565 biennium), who wished to resurrect the power of the Roman Empire, by then built a plateau on the top basilica and fortress wall. In addition, a coin was found on Mangup Emperor Theodosius, minted in Chersonesos or in Constantinople. Apparently the first “inhabitants” at Mangup the Goths and Greeks appeared, having found refuge and hiding from Hun nomads. It was Justinian for the ready-allies at one time undertook the construction of a fortification on Mangup. So Thus, the Mangup fortress was the northern natural, and then man-made outpost of Chersonesos. In the 8th century, Crimea underwent Khazar invasion, against which in 787 the population raised insurrection. The Khazars stormed Mangup by storm and first ravaged him, but then they restored the “cave city”, putting there “their” feudal lord (it is believed that the word “mangup” is of Khazar origin). IN X-XI centuries in the history of Mangup we find a “white spot”. Maybe to Chersonesus no longer needed protective functions northern fortress, the alpine city was depopulated and fell into decay. Further in the history of Mangup, everything is more or less definite and historically is logical. In 1204, the crusaders captured Constantinople, and Greeks are compelled to gather all forces together. At the same time on Mangupe founded the Principality of Theodoro. In 1299, Nogai tries Take the well-fortified Mangup by storm. To no avail. However the nearby fortress Eskerman fell in front of the invaders, what else more raised and strengthened the authority and significance of Mangup. In 1395 Mangup obeys Khan Tamerlane, but quickly “comes to his senses” and after 4 years gives a worthy rebuff to Edigheus, who leaves with the army “sloppy bread.” In the XV century, the heyday of Mangup, the Principality successfully cooperates with the Horde, with the Crimean Khanate Gireev. it the golden time of Mangup. And all would be, as they say, nothing, if not Turks … In the spring of 1475 they approached the walls of Mangup, but received worthy rebuff. The siege lasted six months, and only by cunning through Turks’ unlocked gates entered the walled city. At a terrible hour Moldovans and Hungarians helped Mangupu … Diplomatic support also rendered the Russian prince Ivan III, who announced the marriage of his son to Theodore Princess. But everything was in vain … Mangup died brave, and before that his ruler treacherously sided with Turk. Seven times the Turks unsuccessfully stormed Mangup, putting at The slopes of the natural fortress are several thousand soldiers. But the victory of that was worth it. Together with the Turks, the Greeks were forced to live here and descendants of the Khazars, Karaites, Jews … Mangup becomes 300 years old Turkish, the conquerors left the fortress only in 1774. Therein memorable year, after the defeat of Turkey in the war with Russia, Crimean Khanate emerged from vassal dependence on Istanbul, and Turkish garrison left the walled city. What kind of sim followed? Russians showed Karaim to “all four sides,” and the Greeks were resettled in the Azov region, after which Mangup was again empty and became fat. … In Mangup-kala we visited in early January 2012 years and reverently touched the legendary stones of the “cave city ​​”, rising to the top. At the foot of Mangup is located the village of Khoja-sala (Holy Village), whose residents said that there is a lot of different animals. In summer, it is crowded and noisy. Especially in the foot of Mangup on a man-made lake. 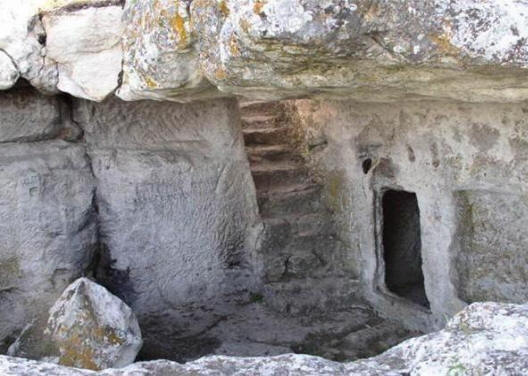