It’s no secret that history is sometimes rewritten to please the authorities. holding. This has happened more than once in Russia. And not only in the last hundred years. Some experts say with confidence: the history of the Slavs not at all a thousand years old, as is commonly thought, but much a long time. And in confirmation are the ancient runic books from the library of Anna Yaroslavna … THE RICH BRIDE IN THE XI CENTURY Russian Princess Anna Yaroslavna, daughter of Kiev Prince Yaroslav Wise, married the French king Henry I, She brought a whole library to his spouse’s homeland. Manuscripts were her dowry – and, by the way, very valuable. Departure of Princess Anne, daughter of Grand Duke Yaroslav the Wise, to France for a wedding with King Henry I. 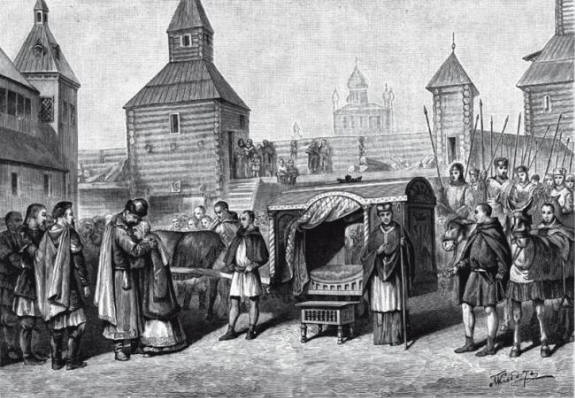 Photo from open sources So, on the famous Reims Gospel from the Anna’s library, the French kings swore during the coronation, including the latter. Agnes’s rarities, as the French called her, almost eight hundred years were in the abbey she created Vincent in the town of Senlis. But during the Great French convention revolution book wealth of many monasteries and abbeys migrated to Paris and became property National Library of the country. FRIEND OF LAW During revolution in Paris under the name Paul Ocher lived Pavel Stroganov – son of the famous Alexander Stroganov, count, senator, member State Council, collector and director of the imperial public libraries. Paul Ocher was known as a Jacobin and was a member of the club. “Friends of the law.” Meetings of “friends” took place in the former royal Residences – at Versailles. It was very convenient: in order to work out the constitution of the nascent republic and the declaration of rights and freedoms, club members often had to use legal documents from the royal library, located right there in Versailles. Paul Ocher was clearly in the right place at the right time: he was appointed not only the librarian of the club, but also the keeper royal library. However, Paul was not very occupied by the ancients manuscripts and books – much more attracted to revolution and love adventures. He made an affair with a courtesan known throughout Paris at one time a lot of noise. But genuine interest in treasures the royal library was shown by his father – Count Stroganov. Is worth it is surprising that when his son was in the post of chief the custodian is a significant part of the royal library (including Slavic runic documents) was sent to the Russian the embassy was in the hands of college assessor Peter Petrovich Dubrovsky. By the way, after a while, by chance, it was revealed pseudonym Pavel Stroganov. He was recognized as a Russian spy and expelled from the country. The Case of Manuscripts Meanwhile, taking advantage of the troubles, Ambassador Dubrovsky took out from France a rich a collection of books owned by Anna Yaroslavna. She rightfully considered the most unique – Egyptian papyrus, scrolls with texts ancient authors, letters from French rulers dating back to the 5th century, Christian and ancient Slavic runic books and scrolls! Slavic runes

Photos from open sources Soon the glory of the acquisition of Dubrovsky spread throughout Europe – its collection was compared to a collection the Vatican itself! Newspapers vied with each other that in the “hut”, in “wretched walls” kept the richest treasure of centuries, worthy of another fate. The director himself also came to Dubrovsky’s “hut” imperial libraries of Stroganov. Him, a passionate collector, by all means I wanted to take possession of the collection for my library, but Dubrovsky refused. In 1800, the ambassador donated part of the treasures – ancient Greek, to Tsar Alexander I Latin, Egyptian, ancient French manuscripts. Specially for them, the sovereign ordered to build in St. Petersburg, on Nevsky avenue, a palace called the “Manuscript Depot”, now a building Russian National Library named after Saltykov-Shchedrin. Books presented to the emperor, migrated there. But Slavic runic there were no manuscripts among them. Why? Dubrovsky hid them! And on he had good reasons. Since the time of Peter I in Russia the infamous “Norman theory,” according to which the Russians owe their origin and all achievements alien Scandinavians and Germans. And under Elizabeth, and Catherine the Great, and later this theory was strongly supported, and all evidence of time contradicting her ruthlessly destroyed or declared fakes. Petr Petrovich, the real a patriot, he had no doubt: he would pass the Slavic runes to the library, their would suffer the same sad fate. But no matter how shore the former ambassador their treasures, their fate was unenviable, as, however, the fate of the owner himself. A denunciation was made at Dubrovsky – they say he squanders valuable manuscripts. Are there any hands Stroganov was this the case? Who knows … Special Commission two years led the investigation. During this time, Dubrovsky was thrown out of him apartments and deprived of a salary. In 1816, after a serious illness, he He died without waiting for the conclusion of the commission: the libel was considered false. After his death, a catalog of his collection, but runic there were no books in it. Dubrovsky took a secret to the grave with him libraries of Anna Yaroslavna. FOLLOWS WENT TO THE WEST? It is assumed that the Slavic runes hit the largest bibliophile of that time to Alexander Sulakadzev. At least in his the collection included more than 2,000 ancient manuscripts, and among them – priceless. Ancient parchment, manuscripts on leather, birch bark, scrolls and books from ancient Russian Vedic temples, a huge amount Christian books, as well as Arabic, Greek, ancient Georgian books, books of the Huns, Volga Bulgars, Permians! In most books unequivocally spoke about a completely different origin of Russian people to whom the Normans had nothing to do. It, visible, and played a cruel joke with them! At the end of life A. Sulakadzev offered antiquities from his collection to the Rumyantsev Museum. For Some A. Vostokov arrived from St. Petersburg to get acquainted with them, graduate of the Academy of Painting and Architecture, a former assistant guardian of antiquities of the Rumyantsev Museum. Meanwhile his real last name – Ostenek, and he came from a family of an Estland German, a descendant of the Teutonic knight. For the Rumyantsev Museum Vostokov-Ostenek acquired nothing, but soon became a doctor philosophy of the University of Tübingen and German correspondent Academy of Sciences. What kind of merit? According to assumptions researchers, it was he who transported to Germany some of the most valuable books that I bought from Sulakadzev for nothing. After a sudden A. Sulakadzev’s death in 1830, his wife for another forty years thoughtlessly selling the treasures of her husband. VELESOVA BOOK During the Civil War, Colonel of the White Army Ali Isenbek discovered near Kharkov in a plundered princely estate 43 tablets with runic Slavic scripts. They were copied, translated into Russian and published abroad titled The Veles Book. 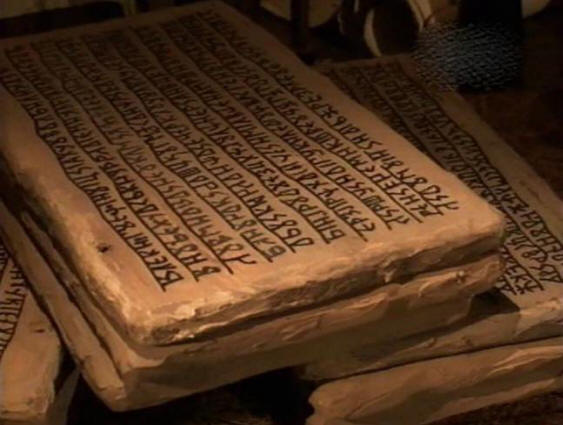 Photos from open sources Since then, any mention of the runic books from the library of Anna Yaroslavna causes many, including and abroad, gnashing of teeth. Why is the creation of Novgorod of the Magi, which concerns the events of Russian history more than a thousand years ago, so worried not only linguists and historians, but also politicians and even representatives of Western intelligence agencies? “Veles book” states: the ancestral home of the Slavs and the most ancient Slavic kingdoms were in the North Caucasus, in Kazakhstan Seven Rivers and in the Crimea. And this contradicts the generally accepted historical version. Oksana VOLKOVA