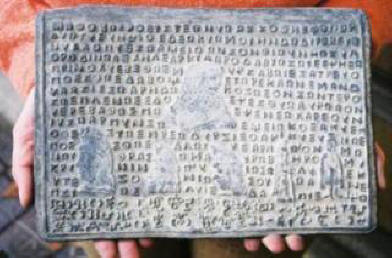 In 1933 Professor Herman Wirth organizes an exhibition under the name “Deutsche Ananerbe”, which means “German Heritage “Hermann Wirth, at that time, a notorious archaeologist and publicist announces scandalous news that he allegedly discovered Atlantis, between Europe and America, in the North Atlantic ocean – at the place where Scandinavia and Canada diverged. However, in many places he found traces of this mysterious civilizations (Switzerland, Norway, Ireland). In 1928, he meets a very rich coffee merchant Ludwig Roselius, captivates him with his idea. Roselius gives money for the construction of the museum of archaeological finds “Ananerbe”. And in 1931 House Atlantis Palace was built. But back to the exhibition, among the exhibits of which were unique, of a kind, runic letters collected in Labrador and Palestine. When this exhibition visited the Reichsfuhrer Himler, he was shocked by the “evidence” the most ancient origin of the Aryan race. After the exhibition Himler offered Virtu help and cooperation in the creation of the institute Ananerbe. Initially, the institute dealt with everything related to heritage. and traditions of the ancient Aryans. But rather, luck turned away from Wirth – his theory was completely defeated by professional scientists, and he himself was accused of fraud and distortion of facts. In 1937 Himler relieves Wirth of his duties and introduces him Institute as part of the “SS”. On the basis of Ananerbe, a department for concentration camp management. In the history of “Ananerbe” it is worth mentioning more one person – Carl Welligut. At one time, he showed well himself on the fronts of the first world war. And had a huge impact on SS officers and Himler himself – they considered him heir the oldest genus Willigotis, dating back a thousand-year history. Finally Welligut “finished off” their message that he owns tribal memory. Thanks to his gift, he “remembers” the events of the whole millennial history of the genus. Welligut was also a member of the Order “New Templars.” Against the background of statements about his abilities, he begins to describe various religious theories and military knowledge ancient germans. His “look into the past” extended so much deeply, that he “saw” all the events taking place in 228,000 years before AD Himmler, after meeting him, decides to use Welligut, as a source of information about old Germanic traditions. In 1933 Welligut joins the SS under the name Karl Maria Weisthor, with appointment as head of the department of ancient and early history in The main service of the race and population of the SS. His duty was to description and presentation of ancient values ​​and traditions, as well as comment and interpret various historical events. is he very quickly soars up the career ladder and becomes the ideologist of creating the occult order of the SS, with his own castle and traditions. Welligut develops on the basis of its imaginary importance mental illness, he begins to abuse alcohol, and in 1939. Himler was forced to remove him from his post. Karl Maria Willigut dies in obscurity in 1946. Immediately after resignation Welligut, fundamental changes are taking place in Ananerbe. Historical research is replaced by scientific. The head is Standartenfuhrer SS Wolfram Sievers. He led the war this organization, and in the same position appeared at Nuremberg tribunal. Himler, obsessed with the idea of ​​racial superiority, highlights huge funds for Ananerbe. And soon the area of ​​work of the institute increases at times. Everything is studied – from the development of “weapons retribution “(projects” Fau “and” Vril “) to various occult rituals of all countries and religions to where at least a little could reach Germany. All archaeological work and research could be conducted. only under the patronage of Ananerbe. Himler obligated this society seize any historical objects and artifacts, attempts were made to create various techno-magical objects, such as, for example, “will crystals” that should reprogram the human psyche. For experiments in various areas “Ananerbe” transferred prisoners in huge quantities. Especially this kind of research became famous for the SS Hauptsturmfuhrer. Professor August Hirt. He killed people by the thousands in horrific ways for the sake of various experiments. But in 1943. the institute suffered the most severe failure when Hitler personally asked to find the whereabouts of the arrested Bennito Mussolini. The “Ananerbe” gave a completely inaccurate answer, after which Hitler was furious. And ordered to stop all funding associated with occult research, leaving only the military development.