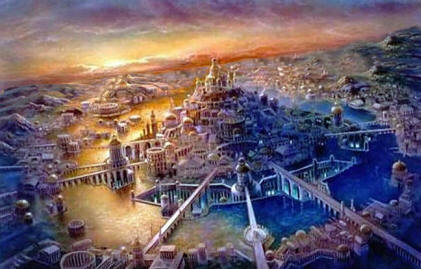 Speaking of Atlantis, the appearance of this legend is associated with the ancient Greek philosopher Plato, who spoke about this island – the state in its treatises (written in the form of dialogs) Timaeus and Critias. The inhabitants of Atlantis were fabulously rich, and their island is incredibly fertile. However, over time, they are mired in sins than angered the gods, for which the gods destroyed them with series of destructive natural disasters. The death of Atlantis occurred more than 9000 years before Plato. The source of the legend about Atlantis, which used Plato, we know with words of the philosopher himself. The legend of Atlantis was something like family tradition passed down in the Plato family from generation to generation. Plato’s great-grandfather named Critias, as a child, heard this legend from his elderly grandfather, who also bore the name (Critium). He in his youth learned the legend of Atlantis from his distant relative – a famous Athenian politician for named Solon. Solon traveled to Egypt, where he heard a story about Atlantis from the priests of the temple of the goddess of hunting and war Nate, located in the city of Sais. This temple, which at that time was a major cultural and scientific center, so far not survived, and the Egyptian city of Sais still exists, however bears the name “Sa al-Hagar”.

Even if you believe that Plato did not invent this legend, the process of transferring it from the Egyptian priests through Solon and several generations of the ancestors of Plato, in this story could accumulate many inaccuracies. Solon might have misunderstood something Egyptian priests. And two old critics telling a story children, could well let the memory down. The student of Plato is famous philosopher Aristotle, probably sparing the feelings of his old teacher during his lifetime, shortly after the death of Plato openly declared that Atlantis as set forth by Plato is fiction. According to Aristotle, Plato used an ancient legend as a shell, investing in her own ideas about the ideal state and the right public morality. Indeed, Atlantis civilization in Plato’s treatises are described in incredibly detail – too detailed for a legend, long transmitted orally. 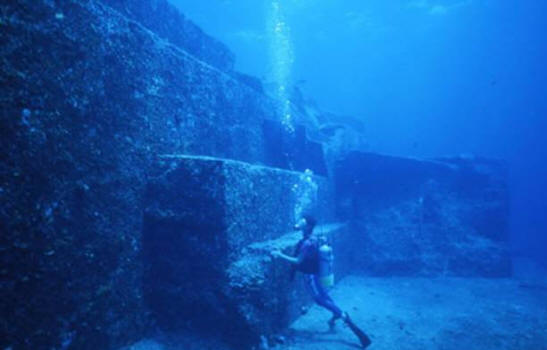 Since then, the lost Atlantis haunts scientists building the most different versions of where she was. Various researchers placed Atlantis in the following places on the world map: Cyprus, Azores, Balearic Islands, Canary Islands. Not all researchers agreed with Plato that Atlantis was an island, so they placed it on the coast of Spain or in African mountains of the Atlas (Maghreb countries), where according to ancient Greek myths held the vault of heaven by the mighty titan Atlas (aka Atlas, and Atlantis in this case is the country of Atlanta). More extravagant researchers placed Atlantis in countries like Sweden, Romania, Peru, Brazil, and even to Antarctica. The list is far from full. Some researchers believe that the lost world Atlantes should not be sought on land, but under water, where the legendary the country set off after a tragic death. For example, Russian Researcher Vyacheslav Kudryavtsev placed Atlantis in the area Celtic shelf (near the British Isles) and associated its death with Sea level rise due to melting glaciers after the last glacial maximum. 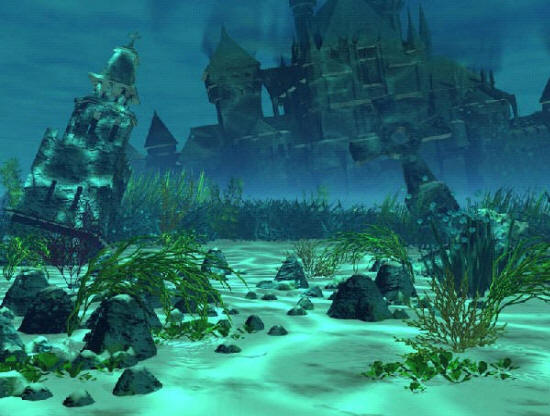 A curious story happened in 2009. Then many respectable world media reported that it was found Atlantis … on Google Earth maps. This underwater Atlantis was accidentally discovered by users of the service Google earth in the atlantic ocean and was flat lines of intersecting city streets on the seabed. But soon it turned out that the image in question was graphic artifact arising in the processing of electronic cards, which Google employees just forgot to retouch. 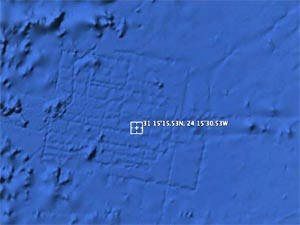