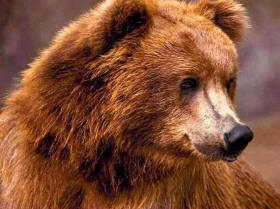 Probably so many fairy tales, songs, legends and traditions like a bear. Respectfully Russian people to this animal, calling him “forest governor” and “master bora. “In most fairy tales, a bear appears before us as good simpleton, a little clumsy sweet tooth, always ready to defend weak and offended.

However, according to old traditions, the bear is not so good-natured animal. This is one of the most mysterious creatures on a planet shrouded in a halo of incredible mystical secrets.

Berloga – entrance to the underworld

Almost all peoples of the world have a special relationship with the bear. IN some countries call him the ancestor of people, and in others – a man, become a beast by the will of the gods. One way or another, toptygin is unusual creature endowed with unknown magic, helper and friend of the gods.

Colorfully tells how a person descended from a bear The ancient legend of the Indians Quakiutl. She talks about love Dipper to the first man on Earth. Descendants of this pair subsequently populated the entire Earth. One of the ancient Slavic of legends tells that the ancestor of people was werewolf bear.

Warriors of the ancient Celts also called their bear ancestor. It was believed that it was he who endowed his “children” with courage, strength and ruthlessness. In ancient times, the bear was endowed with divine power. The Slavs believed that the appearance of this beast takes the god Veles, and Bear’s den – the entrance to the underworld. 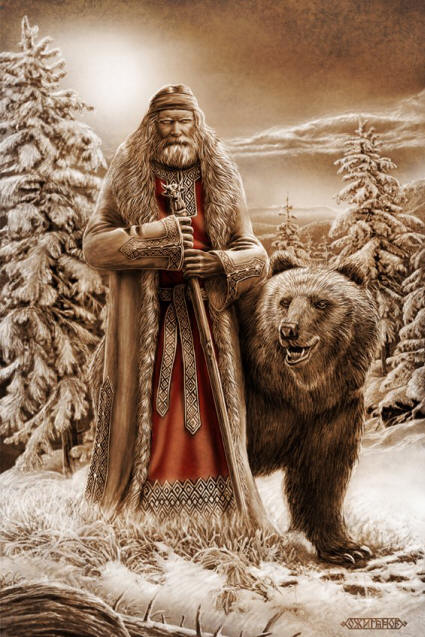 The ancient Greeks endowed Artemis with the bearish features – the goddess hunting. In her temples often settled a tamed bear, and priestesses-hunters during the festival in honor of the goddess performed special dance, throwing bear skins over your shoulders.

But what is most interesting to historians and mystics is the almost forgotten the cult of the cave bear – the mysterious god of hoary antiquity. Our the ancestors believed that the skull and forepaws of this forest deity. Decades ago in a strange structure was found in the Drachenloch cave (Austria) – something like a huge stone box.

The age of the find was approximately 40 thousand years. On the lid the box lay a massive skull of a cave bear, under which the crossed bones of the forepaws of this animal rested. In a word the lid of the ancient chest resembled the famous emblem of a pirate Jolly Roger. But most of all surprised archaeologists contents of this cache. The crate was filled to the top with cave skulls bears.

Scientists are still trying to answer the question of why the primitive people kept these skulls and why they needed to decorate their “styling” is an eloquent sign.

I must say that the bear cult left its mark on Russian the earth. The most famous temple dedicated to the “master of the forest”, was in the territory of modern Yaroslavl, where people lived, worshiping a huge, mysterious bear and bringing their generous bloody sacrifices to the deity.

According to legend, Prince Yaroslav the Wise destroyed at the root a bloodthirsty tribe and was not afraid to enter into a fight with a fierce by the god. From a hot duel, the prince emerged victorious, killing the ax of the defeated toptygin. In memory of these events Yaroslav laid on the conquered land a new city (Yaroslavl), coat of arms which became a bear with an ax, standing on its hind legs.

Later, in the Christian era, people called the bear a “brother “. It was believed that he was keeping order in the forest, as all evil is afraid of the shaggy governor. Devils and witches run from away from him, because they know that he can overcome in a duel water itself.

It was believed that a bear can protect cattle from all kinds of evil. Therefore, Siberian peasants often hung in a stable with a bear head, so that the “forest owner” protected animals from pestilence and adversity.

Ancient myths and tales tell us about the bear as a big female lover. Like, often stealing the women’s toptygin villages or takes the wanderings lost in the forest to their den. There, the unlucky captive becomes the wife of the “forest owner”, who takes care of her and after the birth of their common child lets go home. 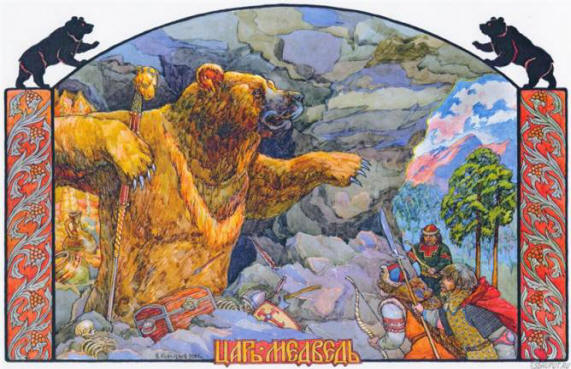 By the way, and the Bears did not deny themselves the pleasure of being time to shelter a hunter in his den … Born from offspring of such unions are mysterious werewolf bears, living in dense forests. They were considered skilled magicians, endowed with enormous physical strength.

According to tradition, bear children did not always stay in forests. They often returned to people and became known as fearless and invincible warriors. So, Russian fairy tales glorified the legendary hero Ivan Bear Ear, the son of a bear and the beauty stolen by him.

In the Scandinavian sagas, the hero Berserker is widely known – a descendant such a union. The warrior, dressed in a bear’s skin, terrified enemies with one look. In addition to strength and fearlessness, he was different from fellow tribesmen with bestial fury and did not feel pain. Exist the legend that this hero became the progenitor of the semi-legendary tribe of berserkers, bloodthirsty warriors who held for several centuries in fear the peoples of Northern Europe.

It is possible that such legends spawned some physical resemblance of the “forest lord” with a person. It is known that the footprint of a bear’s paw on wet ground is remarkably similar to a footprint barefoot human foot. In addition, if you believe experienced to hunters, the freshened bear carcass strongly reminds human body.

It is possible that this similarity gave life to amazing stories scattered across Siberia at a later time. In in many villages people, dying from horror, passed from mouth to mouth “horror stories” about how under the skin of a hunted bear they found a man in onuch or a woman in a sundress.

Despite the beliefs of divine origin and magical abilities of a bear, a huge animal with thick warm fur It was considered enviable prey. However, hunting for clubfoot in all times was a sacred occupation in some way. Existed it is believed that the “master of the forest” cannot just be killed like any another animal.

Fearing revenge of the brown giant, hunters, discussing a plan for the future raids, called alleged prey allegorical names: “old man”, “master”, “grandfather” and others. That’s why the bear so many nicknames, among which Po-tapych and tramp. At the same time, it was impossible to speak about the bear disrespectfully and let alone scolding him, otherwise if the “old man” hears, then he must take revenge on the daring.

Northern peoples – Evenks, Kets or Nivkhs – tried to deceive already killed “master.” During this action, hunters fomented bonfire and the bear was taken to ritually feed and drink tea. Treating “grandfather”, they had leisurely conversations with him, convincing that it wasn’t they killed the “master of the forest”, transferring the blame to the “strangers” – Russians, Yukagir or Dolgan hunters. Also during these conversations they asked the bear not to be angry that people would take advantage of him meat and skin, and promised to continue to render all kinds of bruins respect. 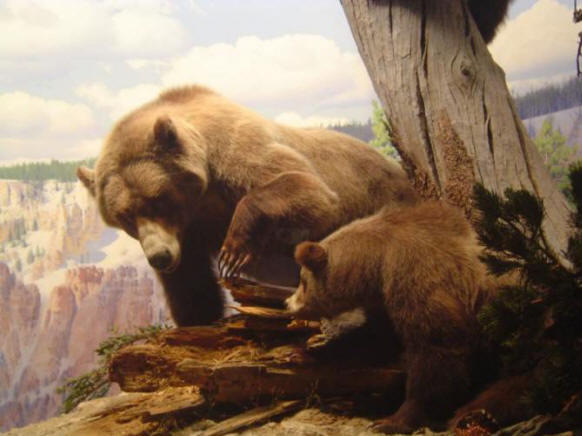 And at the end of this “meal”, when the deceived spirit of the bear rushed off in search of the alien hunters who killed him, miners butchered his carcass, primarily cutting off his front paw and the head. They were supposed to be freed from meat, boiled and hung on tree as a kind of amulet.

Often a stranger was present when flushing a carcass of a bear – a man from another tribe. It was believed that the presence of an alien also Helps knock down the wrathful spirit of a killed bear. Exactly a stranger carved a booty heart and took an active part in cooking ritual treats.

When prey hunters returned to their village, all the women of the village went out to meet them. They welcomed “shaggy old man” as a dear guest and arranged in his honor a real holiday.

The festival in honor of a successful hunt was also organized by Russian hunters. Usually miners gathered in the house of a person who discovered a bear the den, or under the shelter of a brave man who was not afraid to go out with horned against the “master of the forest.”

For a long time it was believed that the unknown magical forces that people endowed the toptygin, and switched to amulets, which made of his skin, teeth and claws.

The most powerful amulet was considered a bear claw. He could do it drive out otherworldly evil from home, and also give peace to the noisy kid. The person who wears this amulet on his chest does not terrible evil eye and spoilage. In the hands of an experienced shaman, a bear claw. becomes a powerful weapon, able to curb the wild element.

According to legend, bear teeth had wonderful properties. IN their antiquities were hung over the cradle of the baby, so that the spirit of the “master” he protected the baby until he could stand up for himself. In addition, bear fangs were inserted into the walls of the barn and secured between the boards of the fences. It was believed that they would not allow thieves to to the property and will preserve property at any circumstances.

The Slavs believed that if a newborn baby is dragged between the jaws of a dead bear, this will save the baby from all diseases.

The magical heart was endowed with special magical properties. If man ate it, then the disease was not afraid of him. Indian peoples there was a belief that a piece of raw bear He endowed man with fearlessness, wisdom and invulnerability. Some people believed that if the patient was fumigated with smoke from burnt bear hair, then all the ailments will recede.

When magic rituals often used bear fat. It was believed that if they lubricate their forehead with a person, then the latter memory will improve.