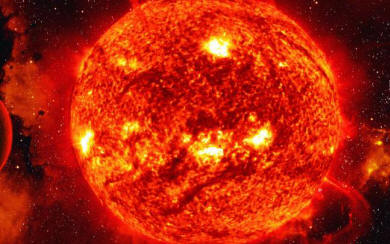 Very gloomy plans unveiled by British scientist Jack O’Malley-James from St. Andrews University (University of St Andrews, UK). He intends to seek the dead aliens. Like, it’s much easier than going on the trail of the still alive. Because the dead give off methanethiol gas. It is stored in atmosphere for 350 years, then turning into a more stable ethane. If in any stellar system will be able to detect either one gas, or another, then this will indicate that here once at least animals lived. And even intelligent creatures. Where from methanethiol will be taken in the amount recognized from the Earth – distances of tens and hundreds of light years? – Gas will appear in the result of the mass extinction of living things, ”Jack says. A creatures die out when the local luminary turns red giant – swells, increasing hundreds of times. And destroys life on the planets that were with him. This is the fate of all stars the size and mass of our sun. Someday – maybe in a million years, maybe in a billion and in the solar system the red giant will swell, killing our descendants and making them source of methanethiol. Unless, of course, the descendants do not have time move somewhere else. As advised in due time people Konstantin Eduardovich.

Having consumed and, as a result, incinerated living beings, the red giant starts to shrink. Until it turns into a bright white dwarf the size of the earth. These are the objects that astronomers recently examined. led by Jay Farihi from the University of Leicester (University of Leicester, UK). Scientists were guided by the idea: any white dwarf should store the remains of the “eaten” by the red giant – chemical the elements that made up the planets and their inhabitants. That is, analyzing the emission spectra of white dwarfs, you can try look for lines of these elements. What, in fact, astronomers and engaged in the project Sloan Digital Sky Survey. In nature because, as they say, nothing disappears without a trace.

The Farihs and their colleagues studied a total of 146 white dwarfs. They were in areas free of cosmic dust, comets and asteroids. That is, the probability that the stars attacked the substance brought from the depths of the universe was minimal. Not less even a preliminary analysis of the spectrum of dwarfs showed: in them full of calcium. And calcium is both hard rocks and … bones.

Further: where calcium was found, increased hydrogen content. And hydrogen is water. Water is life. And calcium and water together are rocky planets with oceans. Like ours Of the earth.

A combination of elements testifying to a former life detect in 109 dwarfs. In fact, the majority of the examined. It’s sad, of course, but it turns out that the bright lights of white dwarfs – funeral. Like candles in a church …

Phosphorus is the main element of bones and teeth. Phosphorus is included in composition of plants that extract it from the soil. Without this element life – in our understanding of it – is hardly possible. And here are the Canadian astrophysicists from the University of Toronto recently discovered phosphorus in nebulae that were formed as a result of supernova explosions. Discovered for the first time among others vital important elements – hydrogen, carbon, nitrogen, oxygen and sulfur.

The remains of the exploding star were saturated with phosphorus. Cassiopeia A, located 11 thousand light-years from Earth. His there are 100 times more than anywhere else in the Milky Way. Source of this phosphorus were most likely living things – with bones and with teeth. At a minimum, plants.

The explosion occurred about 300 years ago. And it is possible that still 11,300 years ago, on a planet, Cassiopeia A had life.

As the author of the discovery, Professor Dae-Sik Moon, optimistically believes (Dae-Sik Moon), phosphorus left over from its former inhabitants, again goes to business – thanks to him someday a new one will appear a life.

“The stars explode,” the professor wrote in the article, published in the journal Science, – the resulting elements become part of other stars, planets and, ultimately, people.

Who knows, suddenly, our phosphorus was also once someone else’s? TO for example, Carl Sagan, the famous American astrophysicist and the exobiologist did not deny this possibility. Back in the last century said that the source of phosphorus in human DNA and iron in his blood – “star material”.

Earthlings betray their presence with “chemistry” – for example, chlorofluorocarbons (CFC) – substances exclusively artificial origin. They intensively absorb infrared rays in the spectrum and, therefore, distinguishable in the atmosphere. Even if the concentration of CFC makes up one part per trillion.

Search for chlorofluorocarbons, and with them even living brothers the mind producing this “chemistry” suggests Lisa Kaltenegger (Lisa Kaltenegger) from Harvard University. True to today’s ground-based infrared telescopes – even the most advanced – sensitivity is still not enough to detect CFC. But enough if you put the right equipment into space. Jim Casting (Jim Kasting) from the Pennsylvania State University (Pennsylvania State University, University Park) I’m sure that having a flotilla of powerful enough telescopes in orbit, you can find another muck. Like solvent fumes, cleaners and refrigerants. And they have their absorption lines.