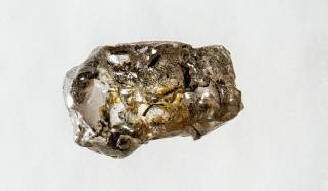 At a depth of hundreds of kilometers underground contains water as much as in the oceans, however, in the form of hydroxyl groups in the mineral of ringwood, the article says in a journal Nature. Observations of the propagation of seismic waves during earthquakes show that their speed changes dramatically by the boundary of the upper and lower mantles of the Earth at a depth of 410-660 kilometers. Scientists have suggested that this is due to changes that the structure is undergoing at great depth The olivine mineral, which makes up most of the upper mantle. This The olivine form was called ringwoodite. So far no one has seen ringwood extracted from the earth’s mantle, as the depth, on which he must lie down, is too large for the extraction of samples.

Graham Pearson of the University of Alberta at Edmontone (Canada) and colleagues first discovered a specimen ringwoodite in the form of interspersed in diamond. The analysis showed that 1.5% the weight of the sample is water in the form of hydroxyl groups (OH). If this ringwoodite sample is a characteristic representative of the boundary zone between the upper and lower mantle, then in it, according to scientists, 1.4 * 10 ^ 21 kilograms of water should be contained.

“This sample is very strong evidence that deep underground there are areas containing water. Subsoil transit zone The earth must contain as much water as all the oceans, together taken, “explained Pearson.

The diamond, which was investigated by scientists, was found in 2008 in Brazil. Magma probably carried it to the surface of the earth when volcanic eruption. The width of three millimeters across this brown diamond was of little economic value. Buying it, scientists wanted to find another mineral in it and discovered ringwood almost by accident. It took them several years to analyzes officially confirming the find.