Belgian archaeologists discover new in Luxor in southern Egypt the pyramid, which scientists attributed to the era of the pharaohs of the XIX dynasty. 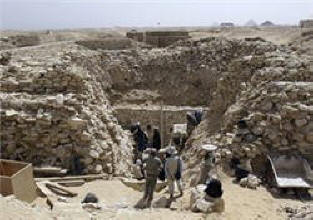 Photos from open sources According to local media, the pyramid was discovered by two archaeologists from free universities in Brussels and Ghent during excavations on one of the sheikh Abd al-Qurn hills. Scientists suggest that the pyramid is a burial place Vizier Ramses II (c. 1279-1213 BC) named Kai Egyptian authorities have confirmed the discovery of a new pyramid. Earlier Italian archaeologists have analyzed the nature of the damage on mummies of the Egyptian pharaoh Ramses III and found out that he died after his throat was cut.