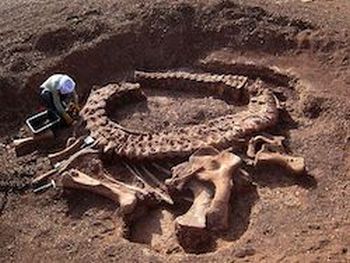 Do you think the remains of a rare reptile representing crazy interest for science, show up not in the thickness of centuries-old dust and not even at the bottom of the ocean, but … in a museum? It turns out – yes, they can.

It is at the Glazko Museum that researchers at the University of Edinburgh “unearthed” the remains of a reptile, which turned out to live in the depths of the ocean about 150-170 million years ago, that is, in those days when the legendary roamed the earth dinosaurs.

The whole joke (or cousin) is that the data is fossil were discovered fifty years ago by one of the lovers paleontology. But for half a century in Scotland was never found professional researchers in this field of science.

And only today, scientists again found unique remains and, finally learned them. According to them, the reptile was not long less than four and a half meters and she lived in the archipelago Inland Hebrides, near the modern Isle of Skye (west Scotland). As far as we know, this island is famous famous scotch whiskey. Is it because of the unique fossils of interest to the whole world, stuck in obscurity almost half a century?