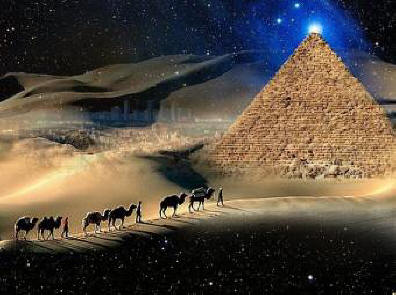 Ancient civilizations have long sunk into oblivion, leaving their descendants a lot of questions and puzzles to be resolved today, hundreds of scientists and esotericists. One of these puzzles is still the mystery of the Egyptian pyramids remains – the only miracle of seven, preserved to this day. The most famous of the pyramids are three giants ascended over the desert in Giza, the entrance to one of which guards the mysterious sphinx. These are pyramids built in honor of Pharaohs of the IV dynasty – Cheops, Chefren and Mykerin. The most the grandiose construction of the complex is the Cheops pyramid. Estimated completion date of its construction is 2500 BC. IN at that time, the pyramid towered over the sands by 146 meters. Her planes lined with polished white limestone slabs, sparkled in the sun, and their luster was visible from a distance many kilometers around. Today, the height of the Cheops pyramid is 135 meters, and time and sand have completely erased limestone cladding from its surface. Absolute accuracy layout of the pyramid as a whole and its details separately, given the size of the building is surprising even for modern builders and architects. The mystery is technology, applicable in the process of its construction. First attempts at serious pyramid studies were undertaken by scientists in the early 19th century. Since about two centuries have passed, but instead of unraveling their secrets, Egyptologists and researchers have only increased the number of puzzles. They are put forward various hypotheses about the method and purpose of construction pyramids, their purpose and application, but none of them can to claim absolute truth today, since there are no comprehensive answers to key questions: – what kind of people erected the first pyramids? – how the ancients built these cyclopean structures? – what purpose pursued them construction? There are various assumptions in this regard – from as fantastic as the intervention of alien civilizations, to the most trivial, like the construction of tombs for the pharaohs, with using primitive tools and simple traction. Mysterious occultist, traveler and philosopher Elena Blavatsky claimed that the pyramids are much older than is commonly believed. By in her opinion, they were built 75 thousand years earlier, and builders giant structures are the atlantes who erected them in on the eve of general chaos and destruction in order to preserve human gene pool. This does not contradict the opinion Nostradamus, who wrote that the creators of the pyramids are residents of the legendary Atlantis, who knew how to mentally control gravity, and thus moving huge stone blocks. There is a legend that under the complex there are cameras in which hidden secrets of human civilization. Modern scientists with using the latest equipment found that under the pyramids, just like under the Sphinx, there really are voids. However failed to get there. Specially launched robot drilled mines, rested against a limestone wall. Egyptian authorities curtailed further research, motivating this with reluctance destruction of unique historical monuments. Also not worth it forget that the tourism business is an essential article income of this state, and the presence of secrecy always attracts people . As a result, the riddle of the pyramid still remains unsolved. Studying ancient texts, scientists came to the conclusion that who lived in the 2600s BC ancient Egyptian scientist and philosopher Imhotep held the key to the solution to most of the secrets of the pyramids. High priest and chief adviser of the pharaoh, he was distinguished phenomenal abilities, was a brilliant doctor, the founder Egyptian medicine, and an architect. It is attributed to him development of the first project for the construction of stone pyramids blocks. His talents were so fantastic that skeptics did doubt its real existence. Be that as it may, he is not left us a clue to the secrets of the pyramids. Some modern researchers hypothesize that the pyramid is nothing more than a power plant, a certain battery and energy translator. They claim that consider the pyramid as the only tomb and monument Pharaoh is meaningless. Firstly, there is no evidence that Pharaoh Cheops was really buried in one of the chambers of the pyramid. Secondly, in the thickness of the pyramid there are rooms and channels, not having burial rites absolutely nothing to do with. Then what goals did they serve? Pyramid researchers believe that she architecture of a grandiose structure, its “filling” was intended for other purposes. The statement that the ancients designers and builders of the pyramid had accurate knowledge in such areas that people learned many centuries later. For example, they knew what the circumference of the earth is, how long a year lasts, what the density of the globe and the speed of light, and much more. What im prevented in this case to possess a source of powerful energy? Inside the pyramid is dotted with mines sprawling throughout the array facilities. Some of them lead to empty cells, while others end in a dead end. Spread out horizontally using volumetric computer graphics this, at first glance randomly located, a web of tunnels and cameras, scientists saw that the whole drawing in precision oriented to the map of the starry sky. It is noteworthy that one of the channels is located vertically along the axial line of the pyramid. By their opinion, this is the energy line with which ancient initiates made contact with other planets, and possibly with the Absolute Mind. Located in the sarcophagus, as in a kind of special protective chamber, the priests of ancient Egypt passed the steps of initiation into the highest secret knowledge, and she a pyramid was used to store this knowledge. By the way, in favor of hypotheses that the pyramid is a power plant, testifies also with what ideal mathematical accuracy she is built. It is curious that during excavations, archaeologists found that where the pyramid of Cheops now stands, 14 thousand years BC. another pyramid towered, much larger than the current one. Another riddle?