An 11-year-old Nenets boy from the Krasnoyarsk Territory discovered the unique carcass of a mammoth who died about 30 thousand years ago. Evgeny Salinder made the find at Cape Sopochnaya Karga in three kilometers from the polar weather station “Sopkarga” in Taimyr. Mammoth also called Zhenya, according to the official website of Dolgano-Nenets municipal district. The officially found animal will be called Sopkarginsky mammoth. 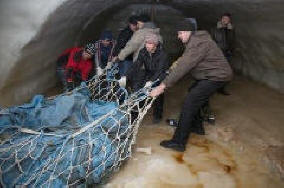 Photo from open sources On the remains of a prehistoric animal a boy living in a family near a weather station reported to parents, they told the polar explorers, and soon scientists were already driving full excavations, ITAR-TASS reports. This is the second safest mammoth carcass in the history of paleontology, experts say. The last time something similar was found in 1901 on the Berezovka River – tributary of the Kolyma. As the organizers of the expedition said, during work it became clear that this is not just a skeleton, but the carcass of a mammoth weighing half a ton, with preserved fragments of the skin, meat, fat and even some organs. According to preliminary expert opinion, a male animal found in the Taimyr tundra. Mammoth died at the age of 15-16 years. To extract Zhenya from permafrost, scientists used traditional tools – axes, picks, and specially designed device to thaw layers with steam ice. Within a week, experts extracted the remains of an ancient animal. Even a cursory examination of the mammoth gave scientists the opportunity confirm several scientific hypotheses. For example, prove that the hump of a mammoth is fat like a camel, not structural features of the skeleton. “This was first seen on paleolithic drawings, and everyone thought why they were so hunchbacked. It was believed due to the fact that they have very large spinous processes thoracic vertebrae. It turns out, no. We see that this animal It was perfectly adapted to the living conditions in the north. Powerful the animal accumulated fat reserves for the winter, “said the deputy Director of the Zoological Institute of the Russian Academy of Sciences Alexey Tikhonov. 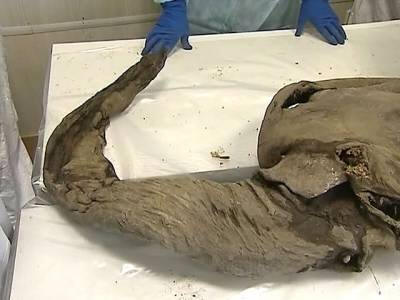 The scientist noted that, most likely, the mammoth died in the summer – at he did not have an undercoat, but he had already accumulated a sufficiently large supply fat. A rare find will be an exhibit of the Taimyr Regional Museum. At the same time, the museum has already agreed to transfer the carcass of a mammoth to the Russian Academy of Sciences: they are going to study it at the Zoological and Paleontological institutes in Moscow and St. Petersburg. IN Dudinka scientists will clean the remains of the earth and dirt, as well as spend first detailed inspection.