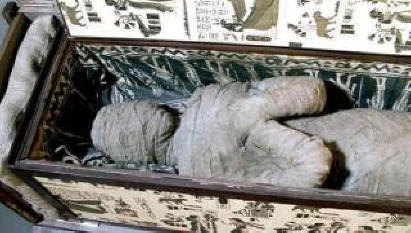 In Germany, a 10-year-old boy found an ancient Egyptian mummy in the dusty corner of the attic in his grandmother’s house. The mummy lay inside painted with hieroglyphs of a sacrophage, which, in turn, stored in a wooden box.

However, is the item really rewound with strips of fabric is a genuine mummy, remains to be seen. Father of 10 year old Alexandra, Wolfgang Kettler, is about to take the mysterious find in Berlin, where experts will study it.

However, Mr. Kettler believes that the sarcophagus, and the mummy, and the death mask found with her are real. According to men, his father traveled around the 50s of the last century North Africa, and in those days you could buy real mummy.

When asked by reporters whether the found in the attic smells bad the mummy, Wolfgang Kettler, answered no.