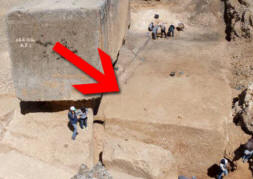 Archaeologists working in the ancient city of Baalbek on the territory of modern Lebanon, reported that they found this season the stone monolith turned out to be the largest in history. The stone block is 19.6 meters long, 6 meters wide and 5.5 meters in height. Its weight is estimated at 1650 American “short” tons, which is over 1496 metric tons. This is the biggest monolithic stone object processed by man. It is made was in the 1st century BC e.

Huge stone blocks were used to build the temple Jupiter in Baalbek, which at that time was called Heliopolis and Julius Augusta Felix. Some blocks of the foundation of the temple weigh 8,000 each – 1000 tons. But the largest blocks found in the limestone quarry, located near the temple complex. Maybe their just could not be transported to the construction site.

In 1999, scientists determined that the weight of the largest of them is 1242 tons – at that time it was the maximum known weight of a stone object made by people. New record a monolith is found under this block.

Excavations during which a record stone block was found, conducted this summer by scientists from the German Archaeological Institute and the University of Lebanon under the leadership of Janine Abdul Massih (Jeanine Abdul Massih).

The technology of movement and styling remains a mystery to scientists so huge stones. The expedition statement emphasizes: “Since it has a relatively smooth surface, the block could move. In this case, there are no traces of attempts left on the stone cut it into pieces. ”