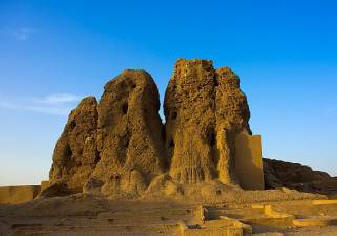 The kingdom of Kerma, located in the northern part of modern Sudan, survived thanks to the Nile. In those years when Egypt and others Middle East civilization hit a terrible drought, Kerma survived as the level of Nile spills in the North Sudan has barely changed.

Scientists seem to have guessed how one of the greatest African civilizations were able to survive the catastrophic drought, destroying other glorious dynasties. Geomorphologists and specialists in dating from universities of Aberystwyth (Wales), Manchester (England) and Adelaide (Australia) believe that the kingdom of Kerma, located in the northern part of modern Sudan, survived thanks to Neil.

Kerma – Africa’s First Bronze Age State Outside Egypt – experienced its heyday in 2500-1500. BC e. and was the main rival of his more eminent neighbor. Analysis of the three ancient channels The Nile showed that the river spills during this period were neither too tall nor too weak. Subsequently, however, everything changed: The Nile stopped filling the channels for irrigation, the state weakened, and the invasion of the reborn Egyptian kingdom put an end millennial civilization. The most amazing thing is that catastrophic 30-year drought that hit these places 4,200 years ago, wreaking havoc in Egypt, leading to the fall there Ancient kingdom and hurt another civilization in the Middle East and Mesopotamia, little reflected on the prosperity of Kerma, who was lucky to be in a place where the Nile spills remained the same. Researchers have taken advantage of advanced geological methods of dating dried channels located in 20 km from today’s Nile. By the way, dating the Nile spills in These places are produced for the first time. Thanks to hundreds of holes dug modern Sudanese farmers to irrigate crops, scientists were able to trace the geological history of old channels. And in some places they preserved on the surface. Their width ranges from one to three kilometers. But Kerma survived a difficult period thanks to not only geographical luck, but also that relied more on cattle breeding, less dependent on the Nile spills than agriculture, and more mobile and more efficient adapt to changing environmental conditions. results studies published in the journal Geology.