Among the inhabitants of ancient Sumer there was a curious story about the invention of writing. According to her, more than five thousand years ago the envoy of king Uruk arrived at the court of the ruler of a distant city so tired that he could not convey what was given to him in words errand. Since the king was very smart, he found a solution. His Majesty demanded clay tablets and wrote on them what wanted to convey to the ruler. 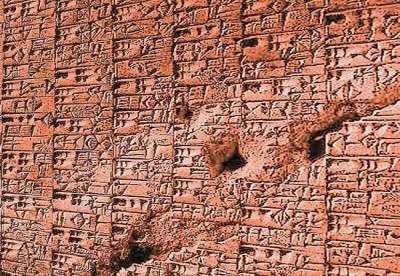 This legend was recalled more than once at a meeting in Pennsylvania. University (USA) Symposium on the Origin of Writing. What concerning scientific theories about the origin of writing, then, according to specialists, none of them can be considered completely reliable. Many of them are of the opinion that the original pictograms (drawing signs) gradually turned into abstract symbols things corresponding to the words denoting these things. Their views contradict the theory widespread in the scientific world that writing developed on the basis of signs on clay tablets, indicating the number of livestock and measures of grain at the conclusion trading or other transactions or just for memory. Whether writing is invented only once and in one certain place and from here spread all over the world? Most archaeological finds suggests that writing first appeared in city-states of Sumer in 3200 or in 3300 BC. TO some clay tablets with protocliniform written signs found at the place where once was Uruk. Gunther Dreyer recently, director German Archaeological Society in Egypt, announced sensational radiocarbon coated results hieroglyphics of jugs, bone products and ivory tusks, which were discovered in these tombs. The analysis showed that they were manufactured at least 3200 BC. “It’s open the question is – where did the writing first appear: in Egypt or in Mesopotamia, “says Dr. Dreyer. Egyptian Hieroglyphs different from Sumerian cuneiform writing, says Dr. Baines, Egyptologist from Oxford, critical of Gunther Dreyer’s results. The scientist suggested that the hieroglyphs were invented independently soon. after the Sumerians created their writing. However was, writing began to spread widely at the beginning of the third millennium BC. Elamites living in the south of modern Iran, probably under the influence of protoclinic writing created their proto-linear. Subsequently, signs turned into combinations of lines. Before the third millennium BC ended, writing appeared among the peoples living in the Indus Valley, in Syria, on Crete and in some places of the territory that it now occupies Turkey. The emergence of writing in China dates back to Shan’s kingdom end of the second millennium BC. And finally, in the first Millennium BC began to write in America. However this the chronology cannot yet be considered fully reliable. So, archaeologists still believed that unencrypted letters, found in the Indus Valley date back to 2500 BC and that the impetus for their creation could give trade contacts of local residents with Mesopotamia. However, recent excavations of the ruins of the ancient city of Harappa indicate an earlier and supposedly independent the origin of this writing. Jonathan Mark Kinoyer of University of Wisconsin and Richard Meadow of Harvard recently posted on the Internet page photos covered with original inscriptions of shards of dishes that was made in 3300 BC ad. If checking for their opening gives a positive result, it should be considered that writing in the Indus Valley appeared almost simultaneously with the Sumerian and ancient Egyptian.