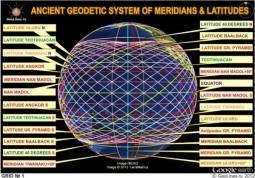 In this article, we will talk about the interaction of latitudes all the same historical sites in the location of which were discovered more interesting patterns, allowing with full confidence talk about the presence of the system in the location of the most significant and monumental structures of antiquity. As everyone knows meridians, unlike latitudes, have the same length and pass across the poles of the planet. All meridians are Big Circles or orthodromes connecting the shortest distance North and South Pole.

With latitudes, everything is different. Among, latitudes only one big the circle is the equator that has the greatest extent. Length the circumference of the remaining latitudes decreases as we approach the poles.

In the meridian system, there are several longitudes of objects that set symmetry for other meridians. For example, meridians Tiwanaku and Uluru are symmetrical about the perpendicular to the meridian of the Great Pyramid, and 10 degrees away from it very high precision. Meridian Fr. Easter is the axis of symmetry for the meridians of Teotihuacan and Fr. Faiths that are separated from him also 10 degrees.

Of course, the distances are slightly different. But, to fulfill symmetrical constructions on a ball of distance and should not be the same. 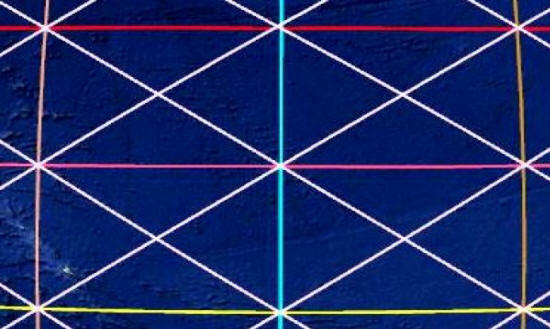 Three symmetric latitudes intersecting with three symmetric meridians, form 4 symmetrical rectangles through the vertices which, you can draw diagonals. But the fact is that the parties there will always be more rectangles closer to the equator sides closer to the pole, i.e. higher in latitude. And for having to draw the right diagonal through the center symmetry, the two higher rectangles should be slightly flattened. In other words, higher latitude should be slightly closer to the previous so that two symmetrical diagonals pass exactly through the vertices of adjacent rectangles. That’s why the principle and the most monumental historical sites are located, the latitudes of which, interacting with the meridians, form several symmetric networks covering the entire planet. Moving away from the equator the distances (angles) between the latitudes of certain objects are reduced given the narrowing of the Earth to the poles, exactly so much that they become symmetrical constructions on the ball are possible.

Latitudes interacting with each other to form several interconnected groups and define several symmetrical systems with amazing properties. In these systems, the equator is the main axis of symmetry and zero latitude.

As can be seen from the list, the system of interacting latitudes includes geographical parallels of our planet. Thanks to this, the whole system linked to astronomical and geodetic parameters Of the earth.

We turn to the first group of latitudes and draw through their points intersections with symmetric meridians of the line of the Big Circles – diagonals of symmetrical rectangles. As the vertical axis symmetry we choose the meridian of the Great Pyramid (VP) and its perpendicular symmetry to which the meridians of Tiwanaku and Uluru. Since the latitudes of the main objects are located with the necessary differentiated step, the system has several options building symmetric networks depending on the method diagonals. But for all networks of this group, the center of symmetry will be intersection of the meridian of the VP with the equator.

Consider the first symmetry – Network No. 1, which is formed from 26 (2×13) mutually intersecting lines of the Big Circles – diagonals of rectangles. In this system, the first diagonals drawn through rectangles symmetrical with respect to the equator and limited by the latitudes of Nan Madola. 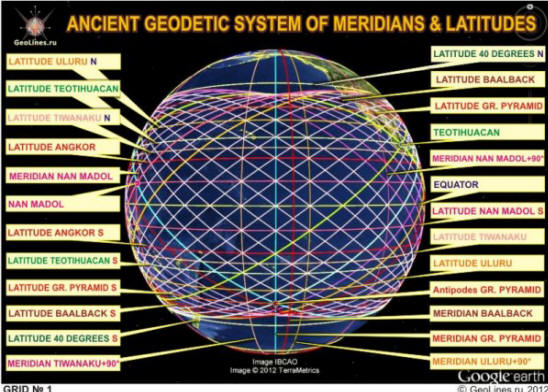 The illustration clearly shows that the objects of the first group erected precisely at those latitudes for which such a thing is possible construction. It is also clearly visible that the entire network is as if inscribed in fortieth latitude. This means that all diagonal lines forming the network reaches its maximum latitude near the 40th parallel. IN this group of objects latitude tiwanaku are the middle line between latitudes of Angkor and Teotihuacan. Since the Baalbek meridian is also divides the 10-centigrade sector between the meridians of the GP and Uluru + 90 * in half, 16 rectangles are formed, divided into four more parts very similar to the British flag.

In this system, 26 diagonals divide the equator into 40 parts of 10 in every ninety-degree sector between the meridian of the GP and its perpendicular. Moreover, the length of the first 5 parts (rhombs) from VP meridian gradually decreases slightly towards the middle of the sector, and then the next 5 parts increase evenly as approach to the meridian of VP + 90 *. There was a striking fact, it turned out that it is absolutely not connected with this system the meridian of Nan Madola is directly related to it. Meridian divides VP sector – VP + 90 *, according to Network No. 1, in a 4: 6 ratio. it means that at the equator from the Nan Madol meridian to the VP meridian – 6 parts (lozenges network number 1), and to its perpendicular 4 parts (rhombus).

In general, Network No. 1 can be called the “Nan Madol Network”, since another surprising circumstance connects her with this object. It turned out that the line Great Pyramid – Nan Madol (shown in blue), i.e. Big circle going through these two objects, there is a line of Network No. 1, which is the diagonal symmetrical rectangles formed by the latitude of Uluru and the south latitudes of the EaP and Baalbek. This diagonal at the equator intersects with another very interesting line (shown in yellow) passing through Uluru point. In addition to Uluru, this line also passes through the point symmetrical Nan Madola relative to the equator, the point of intersection south latitude of Uluru with the Tiwanaku meridian + 90 * and a symmetrical point antipode of VP relative to the equator. 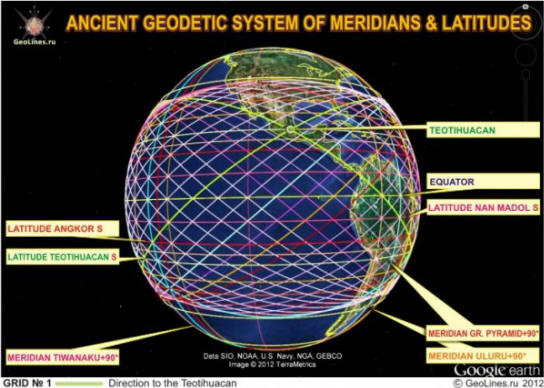 The diagonal system of Network No. 1 has another interesting property. She gives direction to Teotihuacan, and of the two different positions (green lines). In the first case, the direction to mexican pyramids is given by a line passing through a point the intersection of the southern latitude of Teotihuacan itself with the meridian Tiwanaku + 90 *, and the intersection of the Uluru meridian + 90 * with the south latitude of Nan Madola. In the second case, the line passing through Teotihuacan, is a diagonal of rectangles formed by Equator, the southern latitudes of Nan Madol and Angkor, as well as the meridians of Tiwanaku, VP + 90 *, and Uluru. 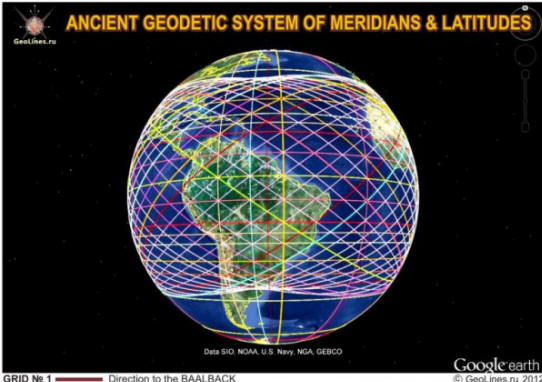 In addition to Teotihuacan, Network No. 1 sets two more directions to Baalbek (red-brown lines), the location of which should not be connected with the diagonals of symmetrical rectangles passing through him. Interestingly, both diagonals belong to rectangles. the formed meridian VP + 90 * and the meridians of Tiwanaku and Uluru. The first line passes through the vertices of the rectangles formed latitudes of Teotihuacan, Angkor and Nan Madol, and the second by southern latitude VP, the latitude of Uluru and the southern latitude of Teotihuacan. In addition, the second the line also passes through the intersection of the Nan Madol meridian with equator.

Network system No. 1 interacts with several other meridians famous historical sites. For example, the meridian of Por-Bajin, in 90 degree sector, 7.5 km apart from the meridian of the GP VP Meridian + 90 *, respectively, 2.5 parts (rhombus). Also the meridians of Easter Easter, Teotihuacan and Father Faith.

If we consider the location of other historical sites regarding Network No. 1, it turns out that many of them also interact with the network and are located on its lines and intersections.

This mutual arrangement of the most significant and mysterious structures of antiquity, the origin of which is still not consensus may not be random. And can only mean one – All the facilities mentioned above were erected strictly in certain places of the Earth, according to a single plan and constitute a single multi-level system, true the purpose of which is unknown to us. Who created this system, and with what purpose is still a mystery. So that we still only to find answers to this and many other emerging questions.