In 2009, the automatic interplanetary station “Cassini” made the last flight past Enceladus – an amazing satellite the gas giant of Saturn. 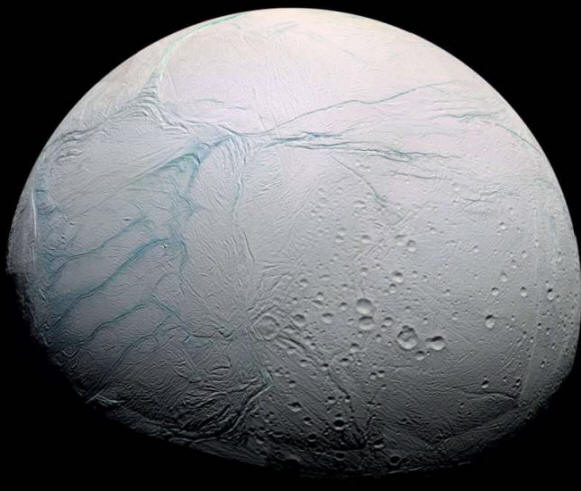 At the same time, the spacecraft made a unique maneuver on altitude of three tens of kilometers literally flew into a stream of emissions ice volcano. With the start of research on the Cassini probe in the system Saturn has become very clear that Enceladus is not quite ordinary device and is fraught with many more mysteries than anticipated earlier.

The main thing was that the chemical analyzers of space dust found salts of potassium and sodium. Huge quantities of these substances well known to us from ordinary sea salt contained not so much in the geyser gas itself as in ice crystals, soaring in outer space.

So there was decisive evidence of the existence of a satellite Saturn is a real icy ocean. Further decryption temperature data revealed that in the giant ice cracks Enceladus hummocks the temperature rises to -85 ° C, compared with 200 degree frost on the surface.

When, in 2005, the Cassini probe reached the ringed system gas giant (second largest after Jupiter) and proceeded to the study of his companions, no one expected sensations from the huge dazzling white snow, inferior in terms of many satellites in the solar system. 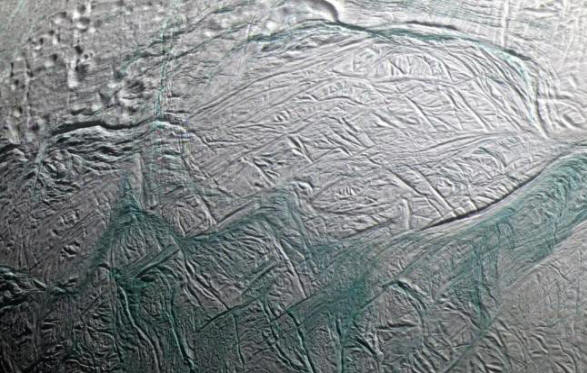 Soon, however, NASA employees from the Jet Laboratory movements with amazement discovered mysterious parallel cracks, “scratched” on the icy surface of a planetoid. Of these strange formations called “tiger stripes” erupted on 500 km high, comparable to the diameter of Enceladus itself, powerful gas ice fountains.

When the ice geysers of Enceladus were discovered, it appeared a complete surprise to planetologists, because volcanic activity on a satellite with a diameter of only five hundred kilometers contrary to theory. By all accounts, such a small planetoid has long been already should have cooled and frozen to the deepest bowels.

Today, versions are being built that the liquid ocean under the ice shell satellite arose due to the gravitational impact of Saturn. IN the theory of tidal waves from the gas giant must constantly deform the satellite. Moreover, in the bowels warmed by the tides Enceladus might have conditions for the occurrence of extraterrestrial life forms.

Life in the cold gloom

According to calculations, at the south pole under the ice crust of Enceladus at a depth of 15-20 kilometers should be particularly deep and highly carbonated ocean of mineral fluid. Its temperature the upper layers can be around -45 ° C and with increasing depth reach 0 … + 1 ° С, which is comparable with the temperature of terrestrial arctic and Antarctic waters. It is possible that the taste of “mineral water” Enceladus will be somewhat reminiscent of the oceans of the Earth.

All these discoveries make us recall the reconstruction of the subglacial wonderful worlds of gas giant satellites science fiction writer Arthur Clarke in the epic Odyssey. By thought Clark, unlike terrestrial seas of the Paleozoic era, hidden oceans satellites of gas giants are not calm, steady environment, and therefore evolution proceeded here very quickly, creating a huge variety of fantastic shapes. 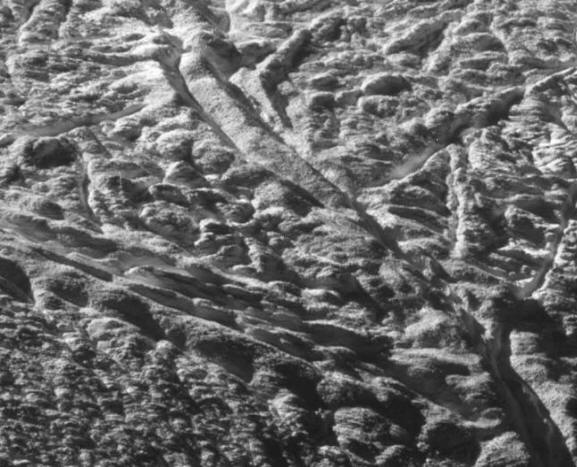 And all these oases of life were threatened all the time imminent death. After all, sooner or later the source of life weakened and dried up as its supply ducts moved into another place. These ocean abysses should just be dotted evidence of such tragedies – whole cemeteries of skeletons and remains overgrown with mineral deposits …

The story of the under-ice world of some moons seems to Clark similar to the ancient history of Egypt, long before the advent of man. Like how Neil carried life to a narrow strip of desert adjacent to him, so these rivers of heat revived the sea abysses of distant worlds. Along countless species of life sprang up, developed and were dying.

On these narrow stripes of abundance stretching across the desert abysses, primitive civilizations could develop and perish and whole cultures. And the world around would not have about these civilizations no idea because oases of heat would be separated apart, like distant planets.

Creatures basking in the heat of lava flows and eating substances that flowed out of holes leading into the bowels planetoids could not cross the hostile desert dividing their lonely islands. If among them were historians and philosophers, each of these cultures would be convinced that she the only and unique in the whole universe.

Paintings by the great science fiction, in many respects correspond real habitats of flora and fauna hiding in the depths of the earth Oceans. It requires only some additional evolutionary factor, because on Earth deep-sea hydrothermal sources did not produce intelligent creatures. Here the determining role giant tidal currents and waves caused by gravity gazgigov. 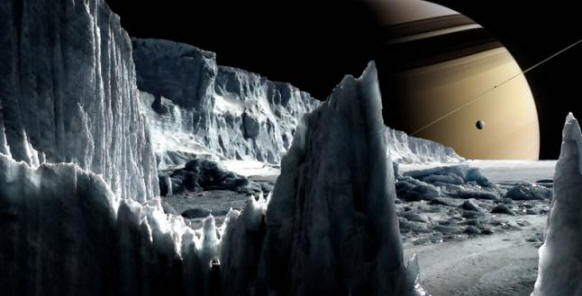 It is during such intensive mixing of ice liquid masses, an additional factor may occur that accelerates the evolution of aliens and bringing them on the path to reason. Although the moon gas giants may possess various internal sources heat, in their depths earthly life would never have arisen, based on solar energy.

That is why life in the dark depths of Enceladus should have group near hydrothermal springs, or unknown creatures could cling to the bottom of the ice dome like sea algae and bacteria in the polar regions of the Earth.

This unusual idea came from a famous researcher. paradoxes of UFOs and NPOs (unidentified space objects) after a detailed study of all photographs about the ice satellite gas giant. Naturally, the statement of the scientist is widely voiced at several symposia on the outcome of the mission Cassini, and subsequent press conferences, was extremely negative adopted by NASA. 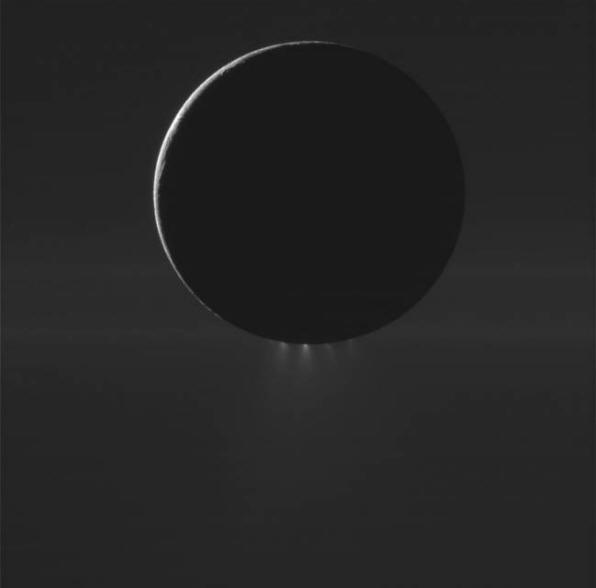 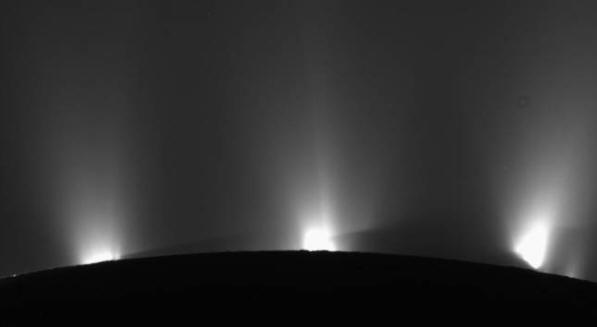 However, Dr. Waring continues to insist on his extraordinary conclusions and even trying to argue that NASA’s once again trying to hide the truth from the world community. IN as decisive arguments the American ufologist leads own calculations, according to which unfocused action ice geysers would inevitably make the moon rotate randomly in different directions.

Meanwhile, observations show that Enceladus is always facing Saturn on the same side. On the other hand, the maximum enlarging images allows you to see that the volcanic plume emissions are more like traces from some giant a jet engine stabilizing the planetoid. 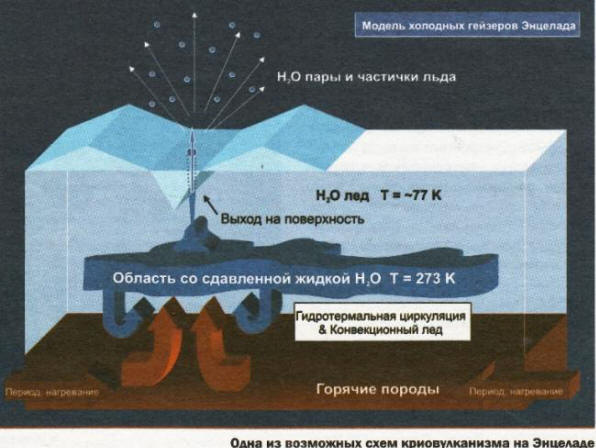 The latest version of the ufologist concerns the size of the satellite, giving its functions as an ark ship on which to the solar system the remnants of an extraterrestrial civilization arrived from a planet affected by some monstrous cosmic cataclysm. Waring believes that it could be the transformation of a strange luminary from a yellow dwarf into red giant, near supernova flash or meeting with a wandering black hole.

By the way, the ideas of this ufologist are far from original. So, back in the 50s of the past century, an outstanding Soviet astronomer Joseph Shklovsky seriously considered the hypothesis of artificial the origin of the moons of Mars. And in the 1990s, ideas about artificial structure of our moon.

In a world of low gravity

Be that as it may, the paradoxical hypotheses of Waring and his few supporters brought back long-standing discussions about the future colonization of relatively large gas and ice satellites (Uranus and Neptune) giants. True, the plans for the colonization of Enceladus should also take into account the relatively low gravity, which in long run can create for the first colonists significant issues. 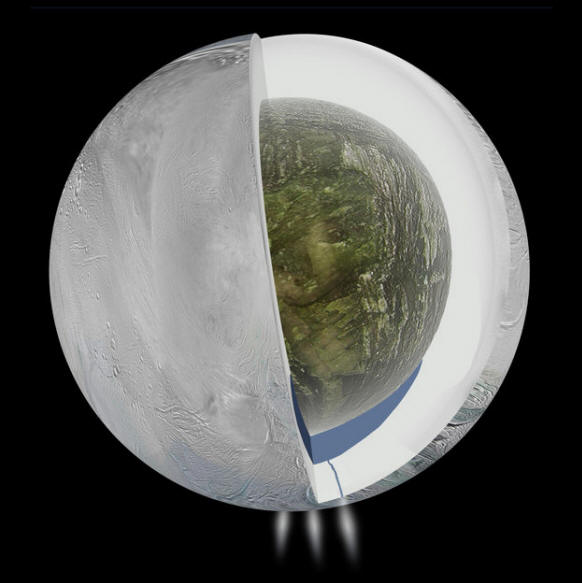 The only way out in this position may be special barometric suits and intense physical activity. At all saying space medicine doesn’t even know how it can affect the human body a long stay in the world with low gravity, because all knowledge about this issue is collected in the state of complete zero gravity of orbital flights.

Meanwhile, the question in itself of the impending colonization of systems gas and ice giants in the distant future will become exclusively important. After a few billion years, our sun was shining, representing the yellow dwarf star today, will turn into red giant.

In this case, the edge of the Sun will approach the orbit of Venus, and all life on the inner worlds of the solar system from Mercury to Earth will become completely impossible. The only way of salvation for humanity will become a massive relocation to the “cool” satellites giant planets.